51 years ago, The Beatles came to Red Rocks as part of their North American tour and now, 1964 The Tribute comes to Red Rocks to celebrate their incredible music!
With their impressive career of 30 years! 1964 The Tribute re-creates the early 60s live Beatles concert with all the details; costumes, hairstyles and of course the beautiful vocal harmonies, that stays true to the original group… “The Beatles we remember were magical…1964 creates the magic!” 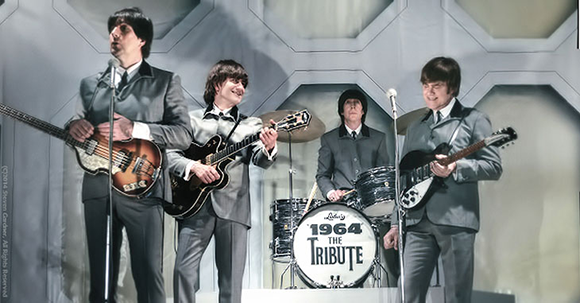 When asked about the bands future as '1964 The Tribute', Tom Work said, "The answer to that is the answer Gary gave his dad. His dad asked him, 'How long are you going to do this?' And Gary said, 'Until they stop coming.' We are not anywhere close to the age the Beatles were. I'm sure many people will comment, 'They're starting to look a little old to be doing this,' but people are still coming. Just being a musician keeps you young at heart.

"The resemblance was uncanny, it sent shivers down my spine. It was just like the boys. Never have I seen another group go to such detail."
Alistair Taylor, Former President, Apple Records