Hiphop legends A Tribe Called Quest will be tearing up the stage at Red Rocks Amphitheater on Thursday 10th August 2017 as part of their final world tour! The sensational band will be performing songs fromt heir latest smash hit album We Got It from Here… Thank You 4 Your Service, as well as the hits that made them pioneers of rap music! Don't miss this once-in-a-lifetime show! 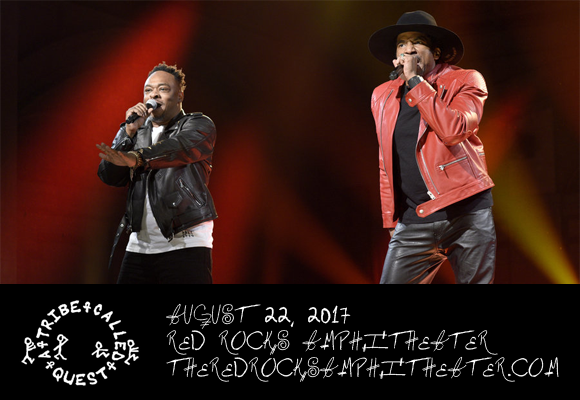 Pioneers of the alternative hip-hop movement, A Tribe Called Quest originated in 1985 in Queens, New York. Consisting of MC and producer Q-Tip, MC Phife Dawg and DJ and producer Ali Shaheed Muhammad, and sporadically MC Jarobi White, the band released their debut album People's Instinctive Travels and the Paths of Rhythm in 1990, finding success with the single “Can I Kick It?”. The band parted ways in 1998, after the release of their fifth studio album, but re-united in 2006. 2016 saw the release of the band's sixth studio album, which was still unfinished when Phife Dawg unexpectedly died in March 2016, but was completed by the surviving members after his death. We Got It from Here… Thank You 4 Your Service lead to the band receiving a Brit Award for best international group, and has spurred a final world tour for the band in summer 2017.