Above and Beyond Tickets

English EDM trio Above and Beyond will once again be taking over Red Rocks Amphitheater on Saturday 19th May 2018 for a night of epic, blissed-out trance in one of the world's most beautiful venues! The crew are touring in support of their eagerly anticipated new album Common Ground, and are looking forward to hitting the road again:

“Our ‘Common Ground’ album tour will travel to over 25 cities this winter, including a few places we don’t get to visit too often. The album is almost finished – we can’t wait to share our latest creations with the North American Anjunafamily.” 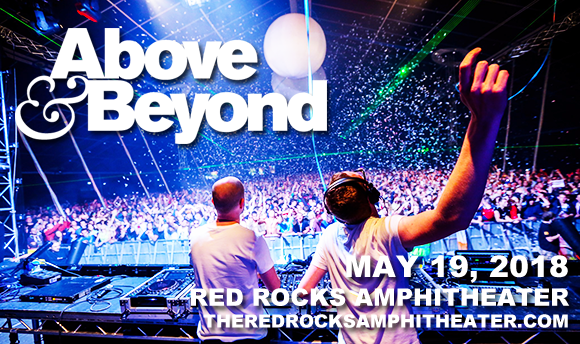 Storming into the Top 30 of  DJ Magazine's Top 100 DJs Poll in 2008, 2009, 2010, 2011 and 2017, English progressive trance trio Above and Beyond consists of members Jono Grant, Tony McGuinness, and Paavo Siljamäki. Owners of London-based electronic dance music labels Anjunabeats and Anjunadeep, and hosts of weekly radio show Group Therapy Radio, the three DJs and producers met in the late 1990s and made their debut in 2002. Their first artist album, Tri-State was released in 2006 and put the band on the map as one of the hottest EDM acts around. The band's sixth studio album, Common Ground, will be released on 26 January 2018 on Anjunabeats.