One of Electronic/Dance biggest artists right now, Alison Wonderland has announced her 2021 tour! Just when you thought it couldn't get any better, Alison Wonderland has dropped the news of her debut at Red Rocks Amphitheater on Wednesday 15th September 2021! Get ready to witness her impressive skills as she gives EDM fans a night to never forget! Grab your tickets while you still can… 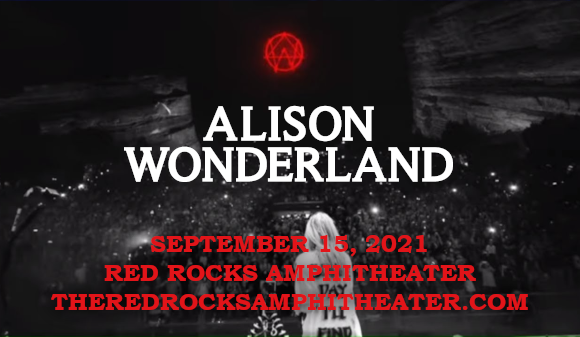 Alison Wonderland has quickly escalated into stardom with her hard hitting EDM, her performances across the board have given her a solid fan base where-ever she makes a stop on her live tour dates.

The exciting producer, DJ and vocalist was born in Sydney, Australia and was surrounded by music from an early age. The electronic dance artist started out in an unlikely setting as she trained as a classical musician and learnt to play cello. Her skills took her to perform in the Sydney Youth Opera where she spent her time learning and developing on her musical knowledge. After training in the classical field, Alison changed her direction and learnt the bass guitar and later joined various rock bands within the local Sydney indie/rock music scene.

As Alison began attending clubs in Australia, her love for electronic music started to grow and before she knew it, she was creating tracks of her very own. She began her first introduction into the electronic scene by remixing popular tracks at the time, her remix of "I Wish I Never Met You" by Sam Sparro grabbed the spotlight back in 2012 and Pete Tong gave her a shout out on the BBC Radio 1 for her flawless merge of deep house and dedication to the original.

That year, Alison Wonderland began performing under her new solo artist name and continued with her remixes which she played in her live set list. Since then, Alison Wonderland has progressed to the next level with her original releases. Her debut record, Run – released back in 2015, took to the charts and hit the number six position.

Alison Wonderland followed it all up with a second album titled Awake which escalated to the number one spot on the Billboard Dance/Electronic Albums charts and pushed her career further into the mainstream. Alison Wonderland was receiving bookings to play at some of the biggest festivals in the world, including Coachella.

Now in 2021, Alison Wonderland is ready to bring her headline show to Red Rocks Amphitheater! With so much hype surrounding her, it's bound to be a big night – join in the fun this Fall!