Folk and soul fans, get ready for a treat. Amos Lee, in a very special performance with the Colorado Symphony Orchestra, will play the Red Rocks Amphitheater on Sunday 16th July 2017! Get your tickets early as tickets for this show WILL sell out! 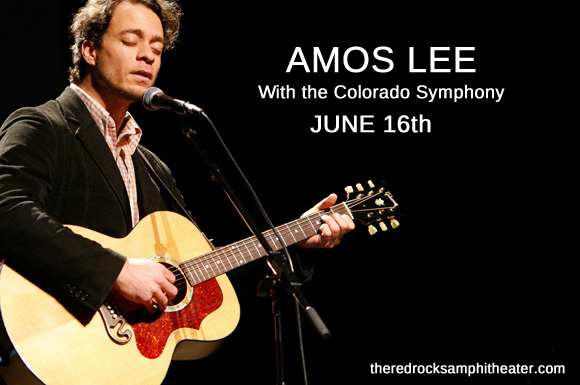 Born in Philadelphia and graduating from the University of South Carolina with an English degree, Amos Lee started to pursue a career in music after working as a schoolteacher. Securing a deal with Blue Note Records, he went on to have a successful career, opening for acts including Bob Dylan, Norah Jones, Elvis Costello, David Gray, and Paul Simon!! In 2011, he had a number 1 album with “Mission Bell”.

Amos Lee's latest release, “Spirit,” develops on his distinctive, Al Green/Norah Jones-esque tranquility, his voice described by the New York Times as “honeyed,” his music built upon the "supple funk of his vocals and arid strum of his guitar". His new album is fuller, fleshing out his simple round without once being overpowering. From the notable ballad “Lightly,” build around a clever banjo riff, to the melancholy tenderness of “Vaporize,” accompanied live by the Colorado Symphony Orchestra, Amos Lee's gentle playing and gorgeous voice will transport you on a once-in-a-lifetime trip the likes of which you've never seen before

Don't delay – get your tickets to see Amos Lee today!!!