Bringing soul-nourishing, blues-tinged folk to the stage, the incredible Amos Lee comes to Red Rocks Amphitheater on Monday 2nd September 2019! With a captivating voice, introspective lyrics and a truly gifted ear for melody, Lee is the sort of live act that lives on in the heart and memory long after the show! He will be performing for his latest release, 2018's My New Moon, and the show will be opened by Grammy Award-winning singer-songwriter Patty Griffin! 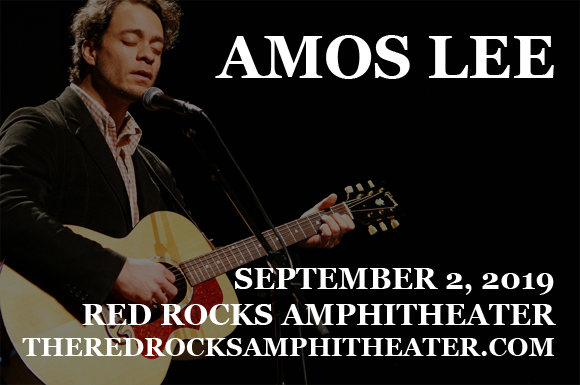 American singer-songwriter Amos Lee was signed to Blue Note Records in 2003, upon sending them his four-song demo CD, and was invited to be the opening act for fellow Blue Note artist Norah Jones' 2004 tour. Lee released his eponymous debut album the following year, peaking at number two on the Billboard Top Heatseekers chart. He has released seven studio albums to date, with his 2011 album Mission Bell debuting at number one on the Billboard 200 chart. Since his career began, Lee has opened for a variety of notable acts, including  Bob Dylan, Elvis Costello, Paul Simon, Merle Haggard, Van Morrison, John Prine, Dave Matthews Band, Adele, the Zac Brown Band, Jack Johnson, The Avett Brothers, and David Gray, and his music has appeared in several films and TV shows, including Grey's Anatomy and the 2005 romantic comedy fantasy film Just Like Heaven. His latest release is 2018's My New Moon.