Red Rocks fans are you ready?! The big news has arrived for Barenaked Ladies exciting and unmissable 'Last Summer On Earth' tour dates and guess what?! Red Rocks is on the list! Join Barenaked Ladies as they bring all of their biggest material to the stage along with a showcase from support acts Gin Blossoms & Toad The Wet Sprocket! You can catch it all LIVE at Red Rocks Amphitheater on Tuesday 21st June 2022 – tickets are NOW on sale, don't wait too long to book yours! 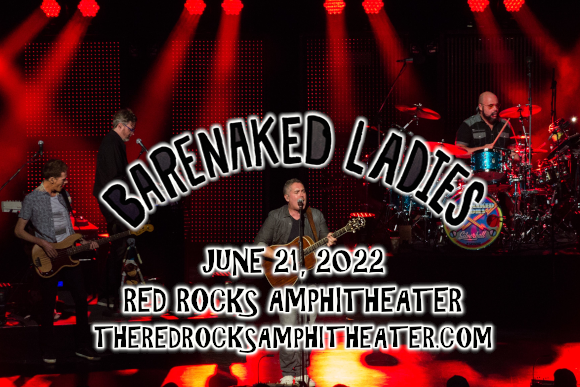 With their impressive releases throughout the years, Barenaked Ladies have given their fan base exactly what they wanted and have showcased their pure dedication to their music. Their hard work has truly paid off as they reach an amazing three decades and still counting of their long standing career. The Canadian rockers first came to light with their gold certified cassette in 1991, becoming one of the only bands to receive such great success from an underground release. With their career blooming, they continued their journey and signed to their first record label within the same year and by 1992, they gave to the world their first ever full album which of course included songs such as; "If I Had $1000000" and "Brian Wilson".

After their initial success, Barenaked Ladies have stayed at the top of their game, creating and producing a steady stream of records for their fan base to get stuck into and although they have been catagorized within the rock genre, they have shown elements of pop, hiphop and rap along with their rock soundscape, which they often feature during their live performances. It's pretty clear with a band that has been going for so long that the bond between the band members has become like a family and this is showcased throughout their concerts as they have fun on stage, often joking together between songs.

As they captivate audiences where-ever they travel to, Barenaked Ladies are great performers and have become known for their concerts as much as their music as they showcase their effortless talents while gracing the stage. Along with their concerts, they have also gained incredible respect across the board, from music critics and reviewers alike, leading them to gain two Grammy Award wins and also an induction into the Canadian Music Hall of Fame.

With countless of hit songs and sales of over fifteen million worldwide – Barenaked Ladies have had an impressive career so far, but the party doesn't stop there! Barenaked Ladies will be travelling across North America as part of their 'Last Summer On Earth' tour for 2022! So whatever you do, don't let this chance pass you by to catch them LIVE this coming summer!