Indie pop rockers Belle & Sebastian comes to Red Rocks Amphitheater on Wednesday 17th June 2015! With support from The Colorado Symphony – It's going to be a very special evening.
Belle & Sebastian are known for their vocal harmonies and surreal melodies, recording memorable albums, playing shows and festivals around the world, Belle and Sebastian have done things their way. Paving the way for bands such as Mumford and Sons and Fleet Foxes. They are now back with a more dance based sound with their new album ‘Girls In Peacetime Want To Dance’! Put on your dancing shoes! 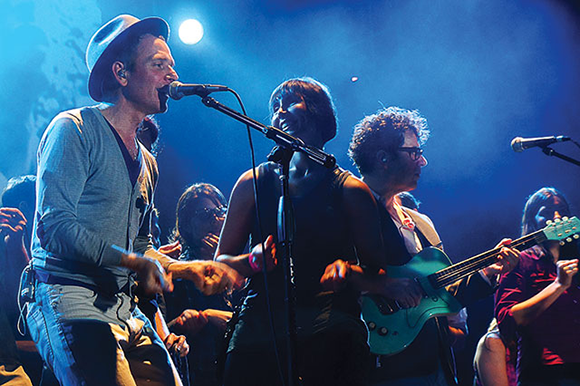 Glaswegian band, Belle & Sebastian have a very intimate, majestic sound, combining folk-rock and '60s pop, mixed with surreal lyrics, their songs keep grounded in a tangible reality. They are often compared to the contemporary folk singer, Nick Drake.
Belle and Sebastian released their third album, The Boy with the Arab Strap, in 1998, landing at #12 in the UK charts, and followed it swiftly with the EP, This is Just a Modern Rock Song.
In 1999, Belle and Sebastian crashed the mainstream when they won, absurdly enough, the 'Best Newcomer' gong at the Brit Awards.
The release of their new album, ‘Girls In Peacetime Want To Dance’ reached #9 album chart position in the UK, which is layered with synthesizers and dance grooves to create a Pet Shop Boys esque record.