What are kids up to these days?!? Well, 17-year-old Billie Eilish has four golds and one platinum album, an impressive performance at Coachella, sold out concerts, and upcoming North American tour. Did your jaw just drop with a resounding 'wow'? Indeed, this kid is most certainly a wonder. And yes, her on-going tour dubbed as “WHEN WE ALL FALL ASLEEP Tour” is making its way to this side of town. She's due to hit the Red Rocks Amphitheater stage on Wednesday 5th June 2019. Her most ardent fans haven't had the shut-eye since tickets started selling because they want first to get dibs on the best seats in the house. If you're not quick enough, tickets to this show could be gone in a blink of an eye. What are you waiting for? Click to book your tickets now! 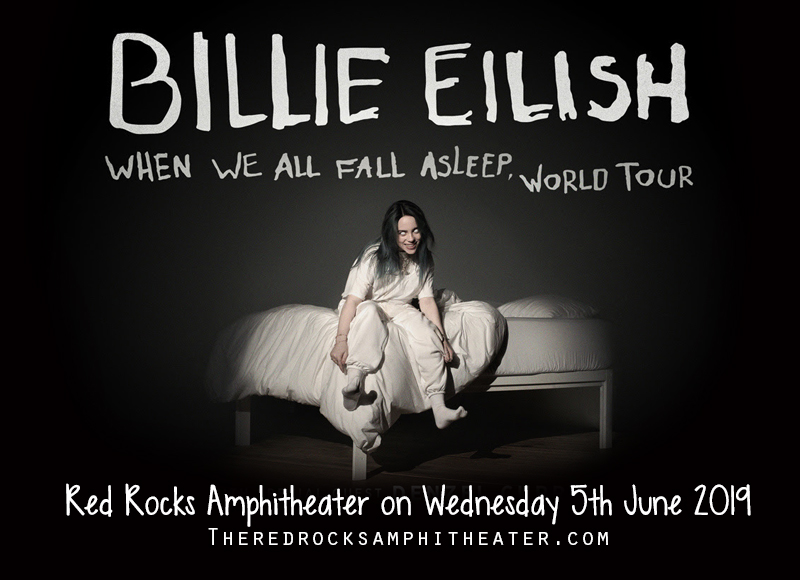 The prodigious talent of Billie Eilish is undeniable. At age 14, she came up and uploaded her breakout single "Ocean Eyes", which went viral and has raked in over 215 million streams on Spotify and still counting. In no time, she has accumulated an army of mesmerized fans from varying age groups and generations. Since then, she has not stopped firing away her loaded ammunition of smash hit singles which include: "Bellyache", "She's Broken", "Fingers Crossed", "Six Feet Under," "Copycat", "Watch," "Bury a Friend"…this list is unstoppable!

Billie Eilish Pirate Baird O'Connell, a.k.a. Billie Eilish was born into a family of actors and musicians. Her mother is none other than actress-musician-screenwriter Maggie Baird. At age eight, she started songwriting and producing her own material, along with her brother Finneas O'Connell. Her haunting sound and the depth and maturity of her lyrics, not only captivated her fans but she also received glowing reviews and earned the respect of the press as well as music critics.

Bellie Eilish is not only getting a lion's share of chart action and positions, but she is also scooping up gold and platinum certifications, filling-up concert halls, and getting the limelight in big festival stages such as Coachella.

Now is not the time to pass up on the opportunity to witness the meteoric rise of Billie Eilish to superstardom. Be there when it happens.