If the past two years felt like it's just been you '& your ghost, you won't be alone now as Blackbear invites you to a concert at Red Rocks Amphitheater on Tuesday, 31st of May 2022. The singer, songwriter, and record producer behind hit singles "Me & Ur Ghost", "Queen of Broken Hearts", "Do Re Mi", and "Hot Girl Bummer" just recently teased his upcoming record, In Loving Memory, expressing his return to his pop-punk roots, set to become his most personal record yet. After 2020's "Everything Means Nothing" album, Blackbear is set to take on a brighter journey ahead, kicking it off with a show made special for his fans. Catch Blackbear live on stage, book your tickets now! 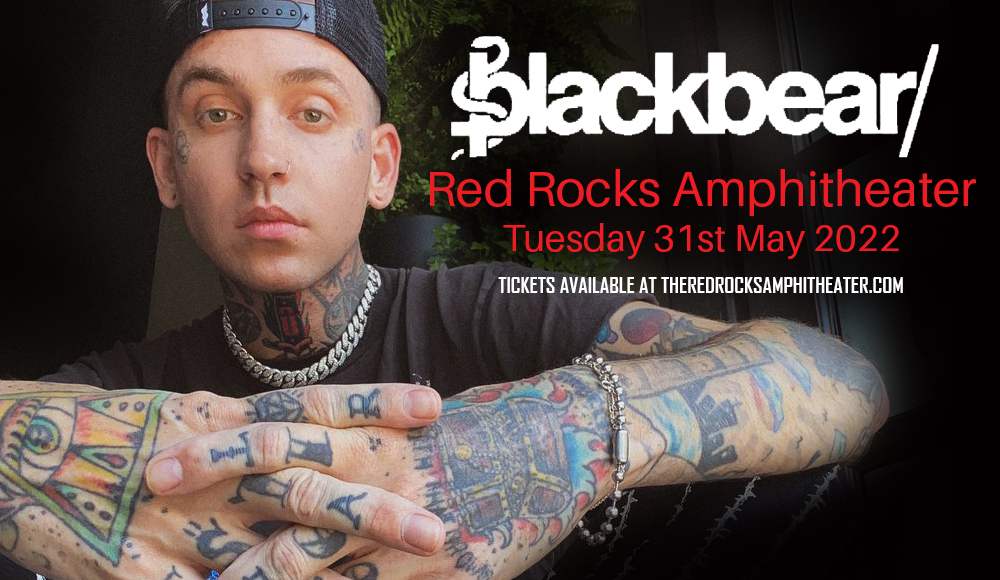 Born as Matthew Tyler Musto, Blackbear grew up in Florida. He grew interested in music through punk-rock bands Rancid and Blink-182. He was also influenced by New Found Glory and Alkaline Trio which his babysitter suggested. By the time he was in high school, Musto was a singer for a local rock band, Polaroid. He dropped out of school by 10th grade to embark on a career in music.

After Polaroid, Musto moved to Atlanta and worked with Ne-Yo, the releasing a couple of early EPs. It was in 2011 when the identity of Blackbear was born, deciding to use the pseudonym for his music, with Mike Posner's "Marauder Music" being the first track to feature the new stage name.

The man also co-wrote Justin Bieber's hit 2012 single "Boyfriend", then dropped his debut EP "Foreplay" in April of 2012. From then on, Blackbear propelled to success as a solo artist, songwriter, and record producer. Among his notable work as a songwriter and producer include Nick Jonas' "Numb", Big Time Rush's "Windows Down", Gnash's "Crash with Me", and Maroon 5's "Beautiful Mistakes".

In 2015, Blackbear released his debut album "Deadroses" which featured the 2x Platinum hit single "idfc" which stayed for over a year on the Billboard R&B charts.

To date, Blackbear has five studio records and seven EPs, with 2020's certified-gold album "Everything Means Nothing" and 2021's "Misery Lake" as his newest EP featuring the crowd-favorite single "@ my worst".

"My new album is very alternative and pop punk," says Blackbear. "The whole idea behind the album is a letter to my father who passed away, and I never got to say goodbye. I’m making this music that is true to my roots".

Blackbear's soon-to-be-released record is expected to be his most heartfelt and nostalgic album from all of his work. He reflects and revisits past experiences and lessons that made him who he is this day.

Catch the one and only Blackbear perform his biggest hits and crowd-favorite tracks live on stage on a special night at Red Rocks Amphitheater on May 31st. Book your tickets now!