The incredible, improvisational jam band sensation that is Blues Traveler will be returning to Red Rocks Amphitheater on Tuesday 4th July 2017! Joined by "Send Me On My Way" groovsters Rusted Root, and fellow H.O.R.D.E. founders Spin Doctors, the '90s nostalgia extravaganza will be one hell of a show! 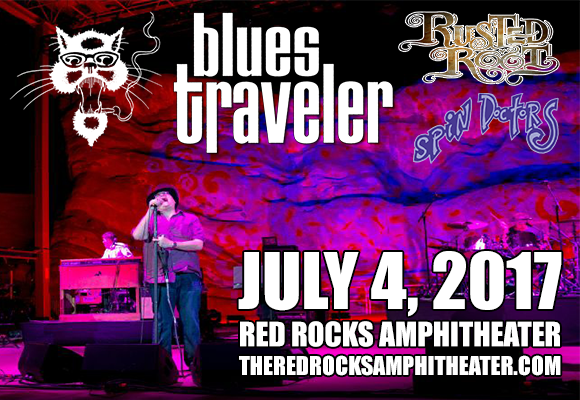 A powerhouse of the early '90s jam band scene, Blues Traveler's commitment to touring, extensive performances and the charisma and prowess of lead singer, frontman and harmonica player John Popper earned them a dedicated following. Formed by high school friends in the mid-'80s, Blues Traveler started as a garage band. After graduating, the band moved to New York and, upon making a name for themselves playing the local club circuit, secured a record deal with A&M in 1989. Three years later, the group joined forces with several other bands, including Phish and Spin Doctors, to found H.O.R.D.E. Festival; an alternative to Lollapalooza. Not only does the band have a loyal fanbase, built from the popularity of their improvised live shows, but they also found mainstream popularity with Top 40 singles like "Run-Around" and "Hook".