British DJ and producer Bonobo comes to Red Rocks Amphitheater on Wednesday 21st July 2021 as part of his Outlier underground-inspired events series! The acclaimed ambient artist will be headlining with a DJ set of his own, and has also curated a second-to-none support line-up with Tokimonsta, Totally Enormous Extinct Dinosaurs, Jacques Greene and Waajeed all joining him on the iconic Red Rocks stage! Book your tickets now for what is sure to be a euphoric night of live music! 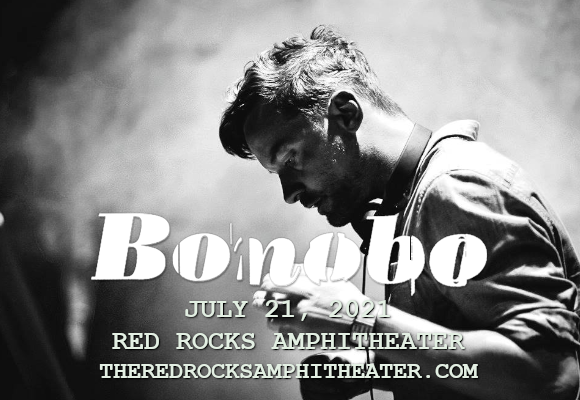 British trip-hop musician, producer, and DJ Bonobo has become a cult artist in the years since his 1999 debut. He released his debut album, Animal Magic, on TruThoughts, before signing to Ninja Tune in 2000. Known for his out-of-this-world DJ sets and live shows with an ensemble of talented musicians, the electronica artist (real name Simon Green) has amassed a huge following over the past two decades with his eclectic, ambient tunes. He has gained increasing popularity through his collaborations with artists including  Bajka, Andreya Triana, Erykah Badu, and Rhye over his five studio albums, and his most recent album, 2017’s Migration, reached number five on the UK albums chart. Both Migration the album and the title track were nominated for awards at the  60th Annual Grammy Awards (for Best Dance/Electronic Album and Best Dance Recording, respectively), and his 2019 single "Linked" was nominated for Best Dance Recording at the 62nd Grammy Awards.