Brantley Gilbert is on the road again, turning up the heat with his Fire't Up Tour, coming to Red Rocks Amphitheater on Saturday 9th May 2020! Gilbert's renegade swag and rock-infused country songs have made him a favorite live act, and it's easy to see why – his energy is infectious and he holds nothing back on stage! He'll be performing from his hotly anticipated fifth studio album, Fire and Brimstone, and he'll be bringing an epic support line-up with him in the form of Chase Rice, Dylan Scott and Brandon Lay! 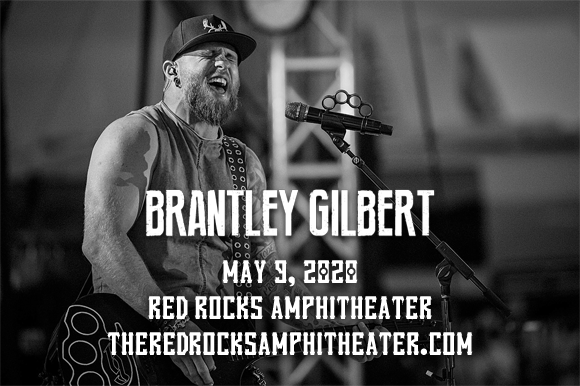 Brantley Gilbert has not had the most straightforward path into music. When involved in a near-fatal car crash at the age of 19, he decided to turn his life around and moved to Nashville, where he began pursuing a career in the industry. He first gained employment as a songwriter with Warner Chapell Publishing, where several of his songs were picked up by notable artists, including Jason Aldean and Colt Ford. After a while, he decided to make the shift to solo artist and he released his debut album, Modern Day Prodigal son, to acclaim in 2009. Matching the rebellious streak of artists like Bruce Springsteen and Steve Earle with a more traditional country approach and the Southern rock stylings of Lynyrd Skynyrd, Gilbert has carved a niche for himself as a truly unique voice. Gilbert has released four studio albums to date, two of which have hit number one on the Billboard Country Albums chart, and three of which have hit the top ten on both the Country chart and the Billboard 200.