Brantley Gilbert returns to Red Rocks Amphitheater on Saturday 15th October 2016 for the second show of his two-night-stand! The rockin' country star is heading out hot on the heels of his Black Out World Tour, and this time, he's bringing best friends Justin Moore & Colt Ford with him to get in on the party! If you like your country rough and ready, this is the night for you!!! 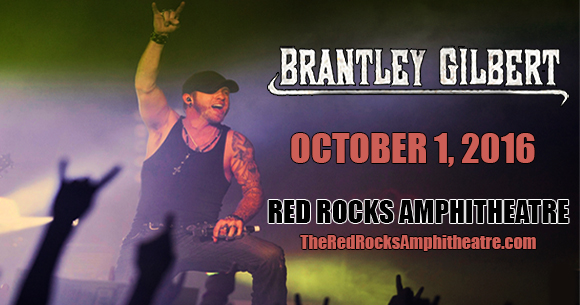 Country rock singer/songwriter Brantley Gilbert made the decision to move to Nashville and concentrate on his music career after a near-fatal car accident at the age of 19. Once he arrived in the city, he signed a publishing deal with Warner/Chappell (Gilbert has written songs for both Colt Ford and Jason Aldean) and his debut album, Modern Day Prodigal Son, was released in 2009 under independent label Average Joes Entertainment. His follow up album, Halfway to Heaven, was released the following year and in 2011, he signed with Valory Music Co., a division of Big Machine Records, who re-released Halfway to Heaven with new recordings and bonus tracks. The singles from the album were well received, leading to a platinum certification in the US and to Gilbert winning the ACM New Male Artist award in 2013. Gilbert released his second album on Valory, Just as I Am, in May 2014.