Classic rock fans rejoice, as two incredible bands team up for a once-in-a-lifetime tour! Chicago – The Band & The Doobie Brothers will be performing songs from their legendary careers at Red Rocks Amphitheater on Tuesday 13th June 2017! With songs such as "Make Me Smile" and "Long Train Runnin'", it's going to be one hell of a show – get your tickets now!!! 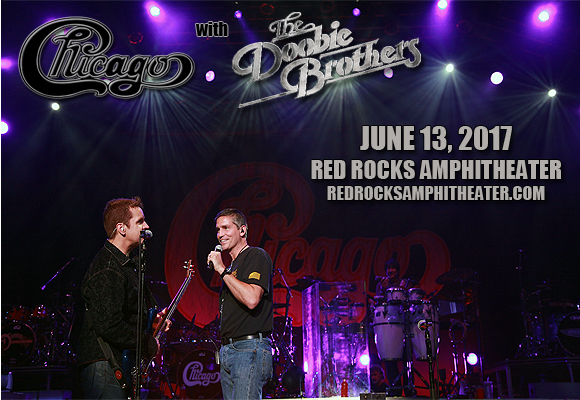 The Doobie Brothers are an American rock band that has sold over 40 million albums worldwide throughout their career, and has been active in the music industry for over five decades. Starting out in 1970, for the first five years as a band, the group featured lead vocalist Tom Johnston and a mainstream rock and roll sound with elements of folk, country and R&B. After the departure of Johnson in 1975, the band embraced a more soul-influenced sound through their new lead singer, Michael McDonald, who fronted the band until their break-up in 1982. After reforming five years later, with Johnston back at the helm, Chicago has constantly toured since 1993, with McDonald sitting in with the band on occasion throughout the year, usually as a special guest. They were inducted into the Vocal Group Hall of Fame in 2004.