Prepare yourselves for Beethoven’s 9th Symphony, the final complete symphony by Ludwig van Beethoven at Red Rocks Amphitheater on Sunday 26th July 2020. Directed by Brett Mitchell, Music Director of the Colorado Symphony and performed by the Colorado Symphony Orchestra, joined by four vocal soloists and a massive community chorus made up of the Colorado Symphony Chorus and other choruses from around the state for an evening that will be a true spectacle to behold… Come on down for a magical night in the Red Rocks and listen to what is arguably one of the wests finest compositions ever performed! 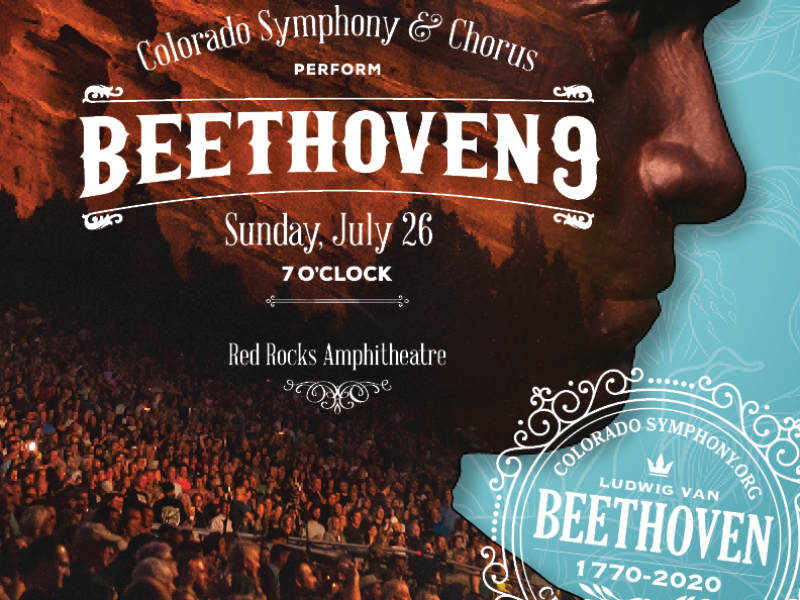 Regarded as Beethoven’s finest work and one of the greatest accomplishments in the history of western music. Originally commissioned by the Philharmonic Society of London in 1817 and completed by 1824, The premiere of Symphony No. 9 involved the largest orchestra ever assembled by Beethoven and required the combined efforts of the Kärntnertor house orchestra, the Vienna Music Society, and a select group of capable amateurs. While no complete list of premiere performers exists, many of Vienna's most elite performers are known to have participated.
In 2001, Beethoven's original, hand-written manuscript of the score, held by the Berlin State Library, was added to the United Nations Memory of the World Programme Heritage list, becoming the first musical score so designated.
Brett Mitchell, hailed for presenting engaging, in-depth explorations of thoughtfully curated programs, he holds degrees in conducting from the University of Texas at Austin and composition from Western Washington University, which selected him in as its Young Alumnus of the Year in 2014. He also studied at the National Conducting Institute, and was selected by Kurt Masur as a recipient of the inaugural American Friends of the Mendelssohn Foundation Scholarship. Mr. Mitchell was also one of five recipients of the League of American Orchestras’ American Conducting Fellowship from 2007 to 2010. Brett Mitchell has served as Music Director of the Colorado Symphony since July 2017.