After a sell-out show in 2018, Red Rocks favorites Dark Star Orchestra return to Red Rocks Amphitheater on Sunday 8th September 2019! The renowned Grateful Dead tribute act will be performing the 'Dead’s show from September 8, 1983, continuing their dedicated re-imagining of the music of one of the most popular touring bands in history! There may even be a few surprises up DSO's sleeve, as last year, Grateful Dead member Donna Jean Godchaux joined them on stage… Who knows what 2019 will bring?! 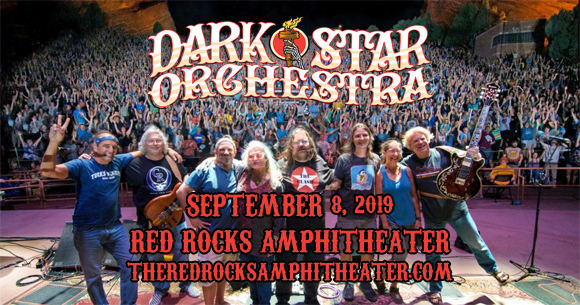 Dark Star Orchestra are a Grateful Dead tribute band from Chicago, Illinois, who first began performing in 1997. Faithfully recreating the Grateful Dead experience, DSO perform full set lists from various periods in Grateful Dead history, drawing from their three decade career, and even varying their phrasing, voice arrangements and specific musical equipment in order to invoke the era of Grateful Dead songs more accurately. Currently a seven-piece group, the band has spent its career touring extensively, much like the Grateful Dead before them, amassing a large and loyal fanbase across the nation. They are noted for their ability to not only recreate the sound of the Grateful Dead, but also the atmosphere of their live shows, and they have collaborated with a variety of Grateful Dead members over the years, including rhythm guitarist/singer Bob Weir, bassist Phil Lesh, drummer Bill Kreutzmann, vocalist Donna Jean Godchaux, and keyboardists Vince Welnick and Tom Constanten.