Be immersed in the strange and wonderful world of David Byrne as the iconic Talking Heads singer takes to the stage at Red Rocks Amphitheater on Monday 27th August 2018 for an ambitious and exciting, immersive show! Performing as part of his American Utopia Tour in support of his latest release, Byrne will be showcasing brand new material in addition to classics like "Psycho Killer" and "Once in a Lifetime"! Not to be missed! 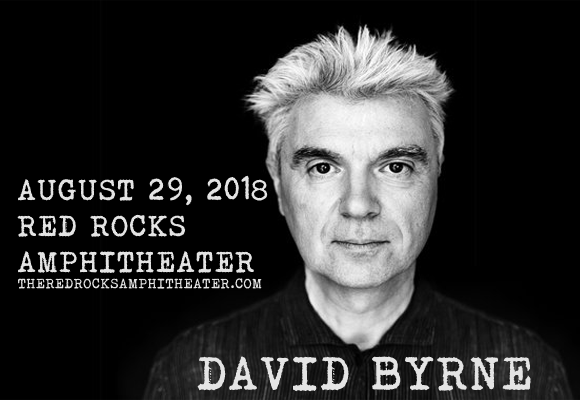 Rock and Roll Hall of Fame inductee and Oscar, Grammy, and Golden Globe award-winning musician David Byrne first came to public attention as the founding member, principal songwriter, and lead singer and guitarist of the American new wave band Talking Heads. The band is widely regarded as pioneering the New Wave movement, and from 1975-1991 the band had several hits, including "Psycho Killer", "Life During Wartime", and "Once in a Lifetime" (all three of which were  included among The Rock and Roll Hall of Fame's 500 Songs that Shaped Rock and Roll). Upon Talking Heads' disbandment, Byrne launched a successful solo career, and branched out into other artistic fields, including film, photography, opera, fiction and non-fiction.