Are you ready for one of the biggest names in electronic music?? That’s right, it’s progressive house legend Joel Thomas Zimmerman, better known by his stage name of DEADMAU5! After releasing a torrent of new music in the last few months, and dropping the “W:/2016ALBUM” in December last year, he’s following that up with his “Lots Of Shows,” tour!! Catch the man behind the mau5 live at the Red Rocks Amphitheater on Thursday 19th October 2017 for the electro house show of the year at the world’s most iconic venue!! Tickets in hot demand – get yours NOW while they last!! 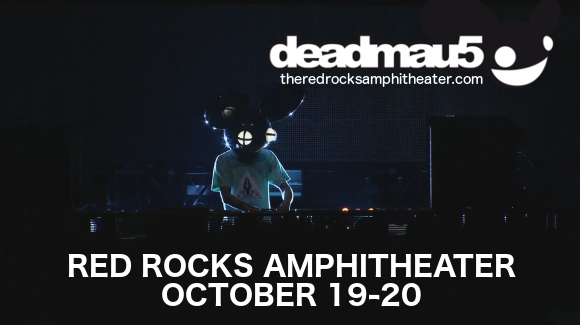 Known for his iconic logo, the mau5head, a 3-D helmet of which he also wears live onstage, Deadmau5 took the world by storm in the early 2000s, with his debut album, the incredible “Get Scraped,” released in 2005. Working with a number of other big names in electronic music production including Armin van Buuren, Kaskade, MC Flipside, Rob Swire and Wolfgang Gartner, Joel Zimmerman has gone on to win no less than six Grammy Awards, and is currently one of the highest paid electronic music producers in the world!!

Now on tour with his latest album, “W:/2016ALBUM/,” Deadmau5 has indicated that his upcoming “Lots Of Shows,” tour will be experimental, involving “digging up a lot of old stuff, new stuff, and in-between stuff, to figure out what fits and doesn’t fit for a fluid show”.
So get ready for some old favorites and a lot of new surprises! Don’t delay – book your Deadmau5 tickets while they last!!