World-famous icon Diana Ross comes to Red Rocks Amphitheater on Monday 22nd July 2019 for one unforgettable night! The legendary Motown, soul and disco singer, who celebrates her 75th birthday this year, will be performing a show of non-stop chart-topping hits from her decades-spanning solo career and from her time with the one of the world's best-selling girl groups of all time, the Supremes! 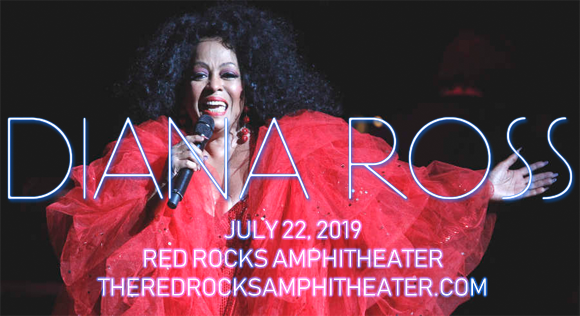 American singer, actress, and record producer Diana Ross became a worldwide sensation in the 1960s as the lead singer of the Supremes; Motown's most successful act. The Supremes went on to become the best charting girl group in US history and one of the world's best-selling girl groups of all time. Throughout their career, the group charted a record-setting twelve number-one hit singles on the US Billboard Hot 100 – a trend Ross continued with her solo career, which has given her six number-one singles including: "Ain't No Mountain High Enough", "Love Hangover", "Upside Down" and "I'm Coming Out", among others. Ross was inducted to the Rock and Roll Hall of Fame as member of the Supremes in 1988 and was honored as a solo artist with the Grammy Lifetime Achievement Award in 2012. She has been named the "Female Entertainer of the Century" by Billboard magazine, and in 1993, the Guinness Book of World Records declared Ross the most successful female music artist in history, having charted a total of 70 hit singles throughout her music career with the Supremes and as a solo artist. Ross was the recipient of the Kennedy Center Honors in 2007, and the Presidential Medal of Freedom in 2016.