Die Antwoord comes LIVE to Red Rocks Amphitheater on Monday 9th September 2019! READY TO BRING THE FURY Die Antwoord have announced their 2019 North American dates and the incredible act are taking to the Red Rocks stage for an out of this world experience! With their explosive performances, you would not want to miss out on catching them, especially if you're a dedicated Die Antwoord fan – grab your tickets for their show before it's too late!! 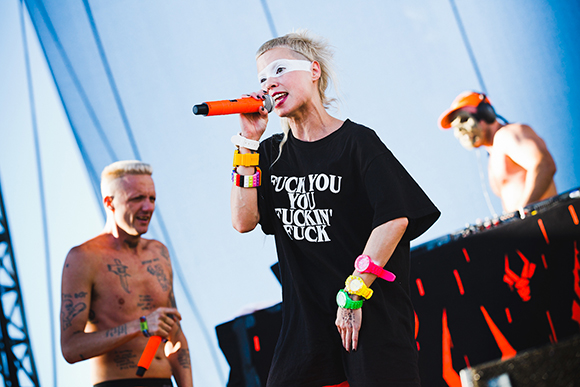 Taking the internet by storm with their downright bizarre “Zef Side,” video, the duo, formed of vocalists Ninja and Yo-Landi Visser with producer DJ Hi-Tek, released their debut album “$O$” for free online before shooting the video for their single “Enter The Ninja.” The video received so much attention that they were forced to move the website to a US-based service provider to handle the millions of views!! And its not surprising they got so much attention – Die Antwoord shock, thrill, delight and amaze, but above all what really is apparent in their videos is the detail, effort and sheer hard work that the group have put into it, especially in those prior to getting a major record deal. From their roots in “Zef,” culture, to their carefully crafted imagery, photoshoots, logos and visuals, the fruits of their efforts are well-rewarded indeed – as are their fans for their support.

Live, Die Antwoord explode with energy – expect lights and pyrotechnics, backing dancers, thumping beats and adrenalin, high-speed, high-pitched spitting fury from Yolandi and contorted dancing, spitting and stage-diving from the aggressive ninja. This is not a show for the faint-hearted – Die Antwoord get their audience involved and die-hard fans will be up there at the front taking everything they can get!! Cited by many as the best show they’ve ever been to, Die Antoord live provide an experience that will stay with you forever and probably cause you serious problems getting out of bed the next day. What are you waiting for?? Get those tickets while they last!!