All you zef cats get ready – Die Antwoord are headed to Red Rocks Amphitheater on Sunday 9th May 2021 and they mean business! Ninja and Yolandi and da krew are going to get the party jumping with tunes from their newest and final album, House of Zef, including singles "DntTakeMe4aPoes" and "Baita Jou Sabela"! The South African rave-rappers are known for their insane, high-energy live shows and this may well be the last chance you'll get to see them at the iconic Red Rocks Amphitheater, so do NOT miss this show!!! 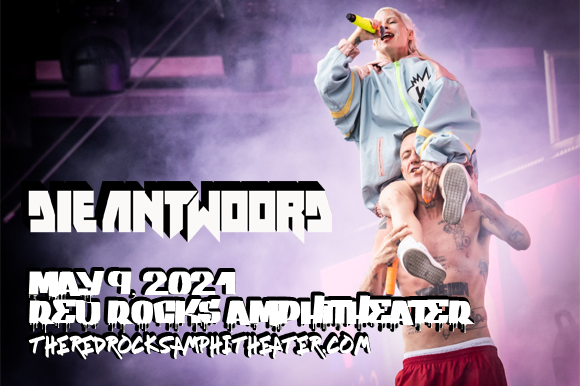 Die Antwoord is a South African electronic hip hop group comprised of rappers Watkin Tudor "Ninja" Jones and Anri "Yolandi Visser" du Toit, and producers HITEK5000 and Lil2Hood. Known for their striking look and championing of the South African counterculture zef, the group became viral sensations due to the popularity of their image and music videos. Formed in 2008, they made their debut with the album $O$, which was originally and internet-only release, made available to stream for free via their website, and re-released in 2010 in physical format after they signed to Interscope Records. The album went on to reach number one on the US Billboard Heatseekers Albums Chart and number four on the Billboard Top Dance/Electronic Albums Chart. They followed in 2012 with Ten$ion, which was released via their own label, Zef Recordz. Donker Mag, their 2014 album, reached number one on the Billboard Top Dance/Electronic Albums Chart. 2016's Mount Ninji and da Nice Time Kid did similarly well, also topping the chart, as well as reaching number two on the US Independent Albums Chart. Their fifth studio album, House of Zef, was released in March 2020. Die Antwoord have said that House of Zef will be their final album.