Fans of rock, indie folk, roots rock and jangle pop, this concert is tailor-made for you!! Beloved 4-piece Dispatch, the band that “redefined independent music history,” are coming to Red Rocks Amphitheater on Friday 16th June 2017, and they’re bringing amazing special guests Guster! Don’t miss out – grab your tickets to see Dispatch and Guster today! Just hit the “Buy Tickets” button above – but be quick, as they’re bound to sell out!! 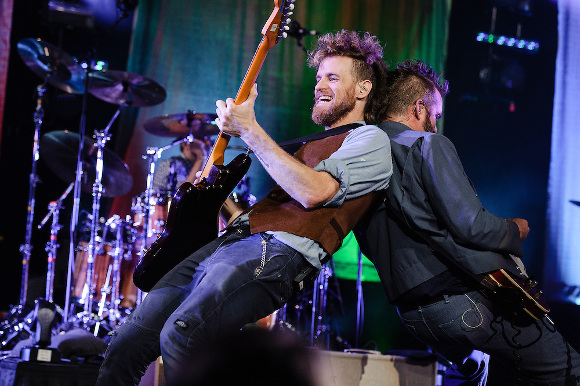 Dispatch are back together after a long hiatus of almost 10 years between 1996 to 2002. Their farewell concert, called “The Last Dispatch,” which brought fans from as far as Italy, South Africa, Mexico and New Zealand to say goodbye to their favorite band!! But Dispatch returned to their long-awaiting and delighted fans with a national tour in 2011, releasing a new EP with 6 new songs later the same year. In 2012, they released “Circles Around The Sun,” their first studio album since the hiatus, and went on a massive North American tour to accompany it.
Together with Dispatch are Guster in support. Well-known for their close relationship with their fans, Guster delight their fans with live taping of their shows, and their unique sense of humor, often involving opening their own shows as fake bands or starting with an empty stage, hiding themselves in the audience and emerging one by one, to much amusement and entertainment. Their style of jangle pop is fun and upbeat, and guarantees the perfect warmup to Dispatch.

So don’t delay – get your tickets to see Dispatch and Guster today!!