New wave legends, Duran Duran are coming to Red Rocks Amphitheater on Sunday 20th September 2015! Duran Duran built their reputation in the mid 1980's, through their fashionable music videos and groundbreaking pop anthems, selling more than 120 million records world wide! Their popularity is unbeatable to this day… join them as they return to the stage this fall to showcase their brand new album, 'Paper Gods' as well as all the classics performed LIVE, "Ordinary World", "Come Undone", "Hungry Like The Wolf" and many many more! 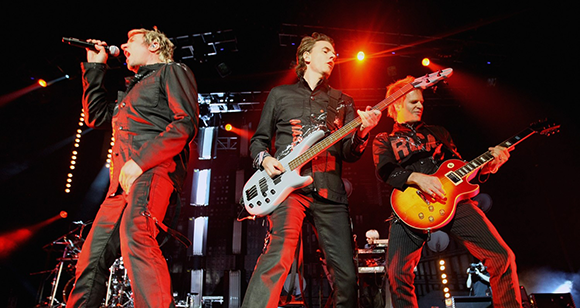 Duran Duran originally formed in Birmingham, England in 1978. Their major success came in the 1980's, around the time of the punk revolution of the Sex Pistols and the new romantic era of Spandau Ballet.
Duran Duran crafted a unique sound, incorporating a number of cinematic styles to their classic pop/rock merge. Just like many other bands of the time, they began working with fashion designers such as Vivienne Westwood to build a sharp and elegant image, this gave them the edge on the scene and helped to spread the word of their music. All five members of the band were photogenic, quickly teen and music magazines in the UK latched onto their good looks and later in the U.S. – making them the ever popular group that we know of today!

Duran Duran's impressive career has lasted for 37 years and are still going to this day, 2015 brings fans exciting and much anticipated news of a brand new album and an epic tour – grab your chance to see them LIVE this year!