Get ready for a huge show, metalheads!! Owned by iHeartMedia and based in Colorado, KBPI radio has announced a massive concert to celebrate the annual 107.9 KBPI Birthday Bash, headlined by Five Finger Death Punch!! With support from Of Mice And Men, this concert promises to be something truly extraordinary. It’s all happening at the famous Red Rocks Amphitheater on May 29, 2018 – tickets are going to go FAST so don’t delay!! Grab yours NOW while you can!! 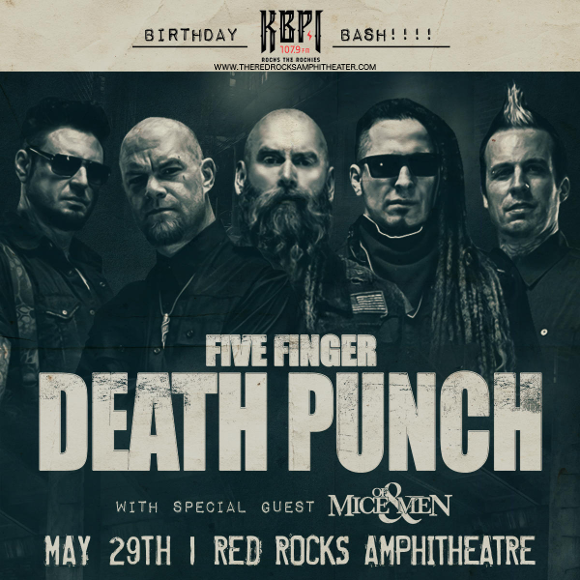 Formed in 2005, Five Finger Death Punch exploded onto the metal scene in 2007 with their debut album “The Way Of The Fist,” which has now been certified with Gold status by the RIAA. They gained even more popularity with their next album, “War Is The Answer,” and their third album, “American Capitalist,” achieved Gold status within the first year of its release! The band have gained a reputation as one of the most prominent and influential bands in the groove metal genre.

The band’s most recent release was a well-earned greatest hits album, entitled “A Decade Of Destruction,” which still featured a few new songs, including “Gone Awar,” and “Trouble.” The band are about to release their next new album soon though – “And Justice For None,” hits record stores on May 18, just 11 days before the concert – giving fans just enough time to grab the album, learn the songs and scream their lungs out at the show!!

Don’t miss out on your chance to be part of this epic experience – get your tickets to see Five Finger Death Punch today, while they last!!