Expect high energy, insane antics and a night of top craic as Flogging Molly comes to Red Rocks Amphitheater on Monday 8th August! The rambunctious Irish-inspired punks will be tearing up the stage with their rowdy folk-rock, mixing traditional Celtic instruments with post-grunge badassery! Joining them will be English, politically-driven troubadour Frank Turner! Don't miss what will be an amazing show! 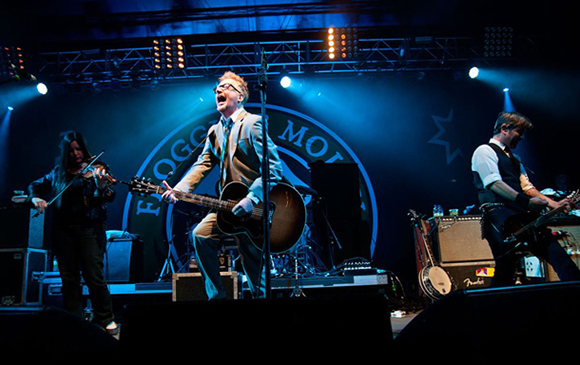 Seven piece Los Angeles based Irish punk band Flogging Molly was formed in 1997 by Dublin-born lead vocalist Dave King, formerly of 80s heavy metal band Fastway. The band take their name from Molly Malone's; the bar which gave them a weekly residency in their infancy. According to King, "We used to play there every Monday night and we felt like we were flogging it to death, so we called the band Flogging Molly." Despite their traditional influences, Flogging Molly's music is far from traditional, fusing the sound of beloved Celtic instrumentation with a punk rock energy, bluesy chord progressions and raw, relevant, politically charged lyrics. They have released one independent live album, five studio albums and a DVD/CD combo which was certified platinum. Now, much to the delight of fans the world over, Flogging Molly are set to release their first studio album in four years!