The incredible Jazz infused Hip hop influenced Jam band – Galactic are comings to Red Rocks Amphitheater on Thursday 14th July 2016! This year Galactic are hitting the road on their 'Into The Deep' tour, celebrating their latest release which includes special guest features from singers such as Macy Gray! As they bring their exciting eye-catching and unforgettable performances to the stage they also bring with them support from Boombox. Make your summer complete – book tickets today! 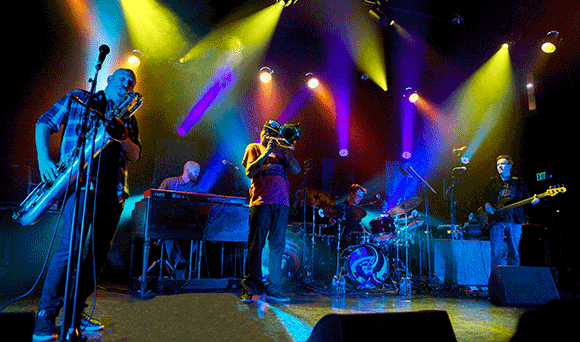 2016 is shaping up to be an amazing year for music, especially for Galactic with their eighth full-length studio release for the New Orleans jazz-funk-jam group featuring guest appearances from Brushy One String, Macy Gray, JJ Grey, Maggie Koerner, Ryan Montbleau, David Shaw of the Revivalists, Mavis Staples, and Charm Taylor.

"Galactic doesn’t need a stable front person, or even a singular approach, to make their dynamic music connect with playful passion and vibrant integrity."

"Creation or Evolution? Maybe just a dash of both. Galactic’s new album “Into the Deep” unearths a distinctly evolved styling creating their most excentric, energetic, and vibrant work yet. Twenty years in the Galactic realm and structure is re-envisioned. The septet has created an evolved texture for their musical format without losing their identity."