If you love Glass Animals and their original songs, then get ready to experience them all for yourself this coming Summer as they make their return to Red Rocks for another exciting night ahead! Glass Animals will be taking to the stage LIVE at Red Rocks Amphitheater on Tuesday 14th June 2022! Tickets are now available – don't miss out on your chance to be there! 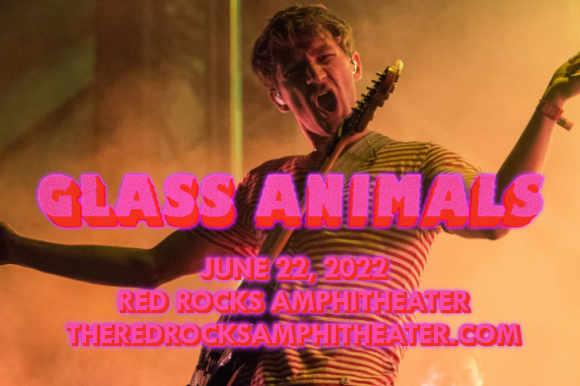 The British group Glass Animals have grabbed the attention throughout their career since their debut album dropped back in 2014. With their steady stream of single and album releases, Glass Animals have showcased themselves so flawlessly with their psychedelic styles and talented members of; singer, songwriter, and producer Dave Bayley with his bandmates and childhood friends Joe Seaward, Ed Irwin-Singer, and Drew MacFarlane.

As the group became friends at an early age, they realised that they wanted to combine all of their individual passion to form a band and Glass Animals was born. What better way to hang out with your long life time friends then to perform all around the world together, taking to venue stages and celebrating music! Their close unit onstage presence has helped to give a concert experience to their fan base unlike no other and has surely crafted on going success for Glass Animals.

Back in 2014, Glass Animals already managed to grab a successful start in the US as they released their single "Gooey" from their debut album onto the scene. And when they followed it all up with their second album, How to Be a Human Being which gained even more exposure than the first and won them awards in 2018.

As a hard working band, Glass Animals really do know how to satisfy the crowd with their fell good version of their single tracks. No two Glass Animals concerts are ever the same as they always set out to give a unique showcase of their songs which they have performed around the world, hitting up some of the biggest venues such as Red Rocks, greatest festivals such as Coachella, Latitude, Glastonbury and have even made various TV appearances on Jools Holland in the UK and Jimmy Kimmel.

2022 brings Glass Animals back to Red Rocks – book your tickets above today to secure your place in the heart of the crowd!