Get ready for a dreamy summer evening. UK-based Glass Animals, with support from the wonderful Little Dragon, will be entertaining you at the Red Rocks Amphitheater on Wednesday 26th July 2017. Get your tickets now for an incredible open-air experience! 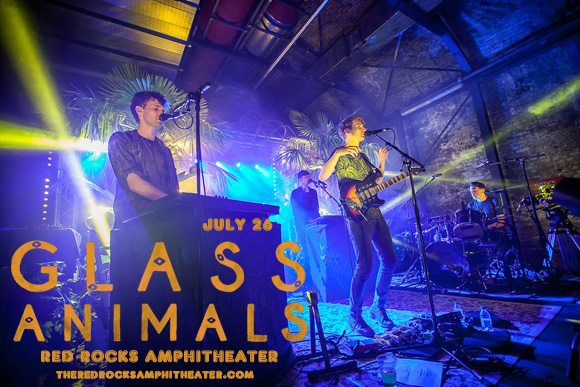 The Glass Animals, labelled loosely as an indie rock band, are a relatively new band, with their first release, ZABA, hitting shops just three years ago. It was a huge critical success, despite the band being little-known at the time, with critics hailing it's innovative use of sound effects and world instruments. The album is psychedelic indie, and uses tropical percussion and jungle timbres along with sounds such as rabbits chewing and birds crying. The idea came from the album's title, which is a reference to “The Zabajaba Jungle,” children's book by William Steig. And indeed, through lush sensory auditory illusions, with “ZABA,” the Glass Animals successfully create a thoroughly alien, yet somehow familiar atmosphere. Their music does more than simply entertain the ear; it immerses the whole, body and soul.

Preceding act Little Dragon will get you perfectly in the mood for this kind of sound absorption. Formed in Gothenburg, Sweden, in 1996, the electronic 4-piece have released four studio albums to worldwide acclaim, receiving a Grammy Award nomination for Best Dance/Electronic Album for “Nabuma Rubberland,” their 4th album. Their sound is moody, sensitive, shifting and sensory, lulling the listener into a trance-like state.

Prepare for a joyous night of music like you've never heard before and possibly never will again. Do NOT miss out – get your tickets now!!