Blues inspired rock singer, Grace Potter is coming to Red Rocks Amphitheater on Saturday 19th September 2015! With support from Jazz fusion band, Galactic. Grace Potter is making a true name for herself on the music scene with her duet with Kenny Chesney, "You and Tequila" and her original chart topping tracks such as "Paris" and "Something I Want". Her soulful licks bring to mind artists such as Norah Jones and early Bonnie Raitt. Make sure you catch her live while you can! 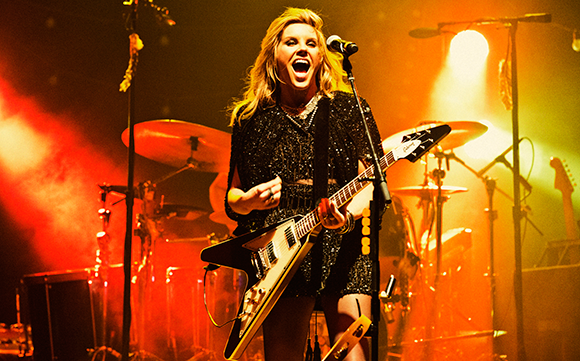 Grace Potter is a vocalist originally from Waitsfield, Vermont. Her musical theatre background encouraged her to study at St. Lawrence University, where she met her drummer Matt Burr at an open mic night. Their friend and bass player Courtright Beard also enrolled in their college and the three of them became a trio, writing jazz influenced songs. As the band grew, so did their dedication and soon Grace Potter & the Nocturnals were born.
Grace Potter's influences are diverse; Madonna, Michael Jackson and Kurt Cobain, which has created her ever unique sound, that combines old school soul music, with rhythm and blues, hard hitting indie rock and a sprinkling of woman power.
In 2010, Potter sang on the VH1 Divas Salute the Troops performance, where she showed off her guitar skills in a shimmy sequin dress, in spirit of Tina Turner. In the next year, she teamed up with country mega star, Kenny Chesney, and co-wrote the hit song "You and Tequila".
This girl is on fire and is definitely one to look out for!