Campers, get ready for the best-loved jamgrass band Greensky Bluegrass!! This year, they’ve announced their return to Colorado to play a special pair of shows at the world’s most iconic venue, Morrison’s very own Red Rocks Amphitheatre! The shows will feature incredible support from The California Honeydrops and Turkuaz. Get your tickets now for the Saturday show on the 22nd September 2018 – hurry, because the tickets for this special show will sell out VERY fast! 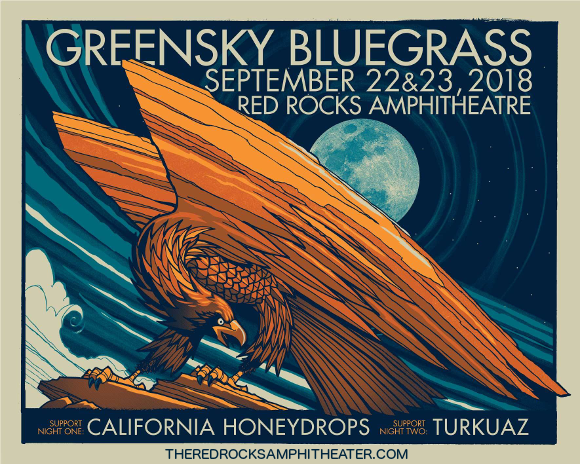 Since 2000, Greensky Bluegrass have been taking the world by storm with “their own version of bluegrass music, mixing the acoustic stomp of a stringband with the rule-breaking spirit of rock & roll.” In a similar vein to bands such as Phish and the Grateful Dead, the band have made a name for themselves for their multiple set live performances, extensive improvisation, and policy of open audience recording.

In 2013, the band made their debut appearance at the Red Rocks Amphitheatre. Since then, they’ve visited several times, culminating in a famous sold out show in 2016! Sharing bills with artists including Widespread Panic, the Avett Brothers, and Umphrey’s McGee, and collaborating onstage with the likes of Phil Lesh, Railroad Earth, and the String Cheese Incident, Greeksky Bluegrass have made it to the revered standing as one of the Red Rocks biggest and most-looked-forward-to acts.

With support from Turkuaz and The California Honeydrops, Greensky Bluegrass promise a concert experience that is truly like no other. What are you waiting for?? Get your tickets NOW!