It's time rock out and rock LOUD, as Grammy Award-winners Greta Van Fleet head to Red Rocks Amphitheater on Tuesday 24th September 2019 for the second night in a row! The March of the Peaceful Army World Tour sees the charasmatic Michegan four-piece performing tracks from last year's incredible debut album, which proved that these rising stars have great things in store for them! The second show has been added due to popular demand, so don't leave anything to chance – grab your tickets while you can! 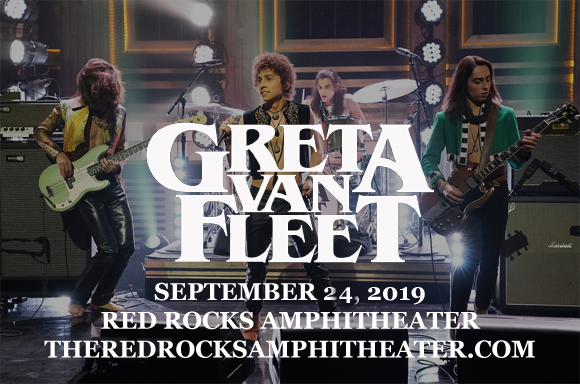 American rock band Greta Van Fleet was foremd in Frankenmuth, Michegan in 2012 and is formed of vocalist Josh Kiszka, guitarist Jake Kiszka, bassist Sam Kiszka, and drummer Danny Wagner. The band was signed to Lava Records in March 2017, and released its debut studio EP, Black Smoke Rising, the following month, launching the single "Highway Tune", which was at number one the Billboard US Mainstream Rock and Active Rock charts for four weeks in a row in September 2017. Anthem of the Peaceful Army, the group's debut studio album, was released in 2018, and debuted at number one on the Billboard Hard Rock charts, also reaching the number one spot on the Billboard Top Album Sales and Rock Albums charts in the first week after its release. "When the Curtain Falls", the album's first single, became the band's third number on single on the Billboard Mainstream Rock chart. From the Fires, the group's 2017 EP, won the 2019 Grammy Award for Best Rock Album.