It's been confirmed!! Griz is coming once again to Red Rocks Amphitheater on Saturday 2nd September 2017 for his second night in a row! Griz is one of the most exciting artists right now on the music scene as he not only combines positive upbeat genres to give audiences a night of their life – he is also extremely talented, both as a performer and producer!

All the instruments, all the flair, Griz will blow your mind – he is dedicated to his fans and is known for giving his tracks out to the world for free – but nothing beats seeing his LIVE show!! 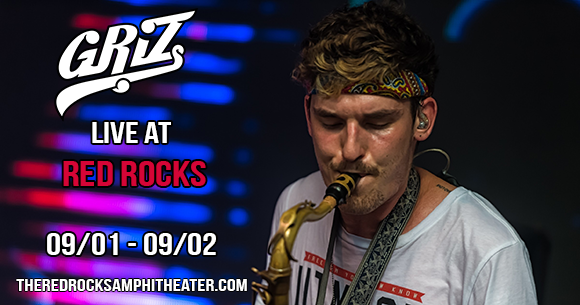 One of the top names that should be on your must-see for 2017 at Red Rocks, is the mighty Griz! This incredibly talented artist has formed a new kind of genre, hailing from Michigan, Griz made himself known for playing the saxophone along with producing funk and electro-soul – a sound that each and every person cant help but move to. He has titled himself as 'future-funk' which hits the nail on the head as it's like nothing ever heard before. Who knew combining classic jazzy riffs with electronic beats could work so well!

"GRiZ came out he came out strong, this is where the night turned from very good to incredible. He was able to keep the energy at a good level even at its lowest times and would read the crowd and bring it back up with some of his incredible saxophone playing or even just the bass heavy drops he had in store for us. Wonderful experience, he made it a very friendly concert and everyone got along and enjoyed it greatly."