Second date NOW added! As a popular name at Red Rocks, the Glitchy feel good sounds of Griz is coming to the stage, not one night but two! With this second date added, fans can get the chance to catch him LIVE! Griz will showcase what he does best with an unstoppable show at Red Rocks Amphitheater – make sure you grab your friends and head down for the big night on Saturday 14th July 2018! 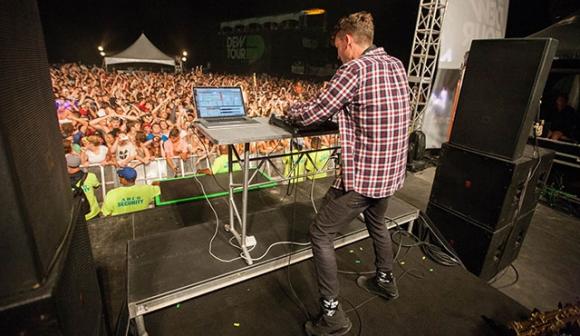 With his first initial release, he managed to perform along side some great names on the circuit – supporting bigger artists such as Bassnectar, Pretty Lights, Gramatik, and Big Gigantic on their respective tours and as a well deserved status of his own headlining tour. Seeing Griz LIVE in action is something that not just dance fans should be a part of but so many who just appreciate good ol' music…

"String lights lined the air, running from the top of the stage to the sound booth. It created this cool patio jazz-feeling setting. There were no LED screens, no lasers, no fire shooting from the stage. The stage setup was simple. The wildest the decor got was the half a dozen fire-totems that lined the stage when the band came back from their intermission.

"When the band came back, GRiZ played a soothing and ambient solo – laying on the ground. That was the least GRiZ moved all night. At other times, you’d see him running around the stage, getting down with the musicians and dropping it low – seriously, the guy danced a lot. His stage presence was fiery and fun, beaming happiness at every moment."