GRiZ comes to Red Rocks Amphitheater on Saturday 31st August 2019 for the last of his renowned annual shows! The Denver-based DJ and producer, who has thrilled Red Rocks with his larger-than-life concerts for the past five years, will be ending the era with a Ride Waves set, performing tracks from his recent album, as well as brand new, never-before-heard material!

“I want to add a level of something new, I want to express some level of technical wonderment or some really cool show, something that’s next level for myself.

“[…] On the business side of things, I need to be able to seat more people and have some more phenomenal shit to show. With Red Rocks, I know we’ve maxed that out,” he said about the final show. 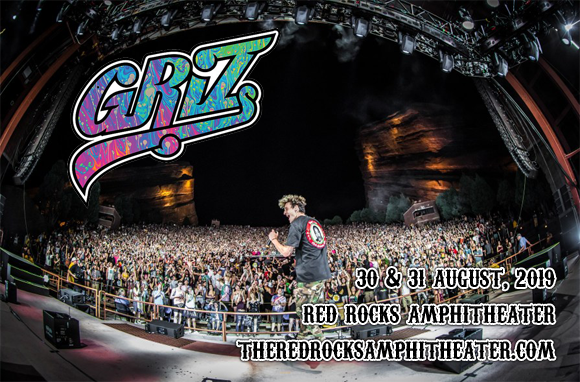 American DJ and electronic producer Griz made his debut in 2011 with the release of a free album called End of the World Party. After supporting Bassnectar, Pretty Lights, Gramatik, and Big Gigantic on their respective tours, Griz began performing as a headline act, and by 2013 he was lauded by several music magazines, including Detroit Music Magazine, SPIN and The Untz, who hailed GRiZ as the "#1 Breakout Artist of 2013." To date, Griz has released six studio albums, including his latest – Ride Waves (2019). For the past the self-described “future funk” artist and Denver resident has performed annual sets at Red Rocks Amphitheater, and this year marks his final show at the noted venue.