This ain't no horror show, this is damn good music! Your favorite venue once again brings you the very best artists for the spooktacularly awesome Halloween on The Rocks! This year's line-up sees Eminem-baiter Machine Gun Kelly & Chicago rapper Juice Wrld taking to the stage, as well as They., DJ Esko, London Richards and Reo Craigun! Coming to Red Rocks Amphitheater on Saturday 27th October 2018! 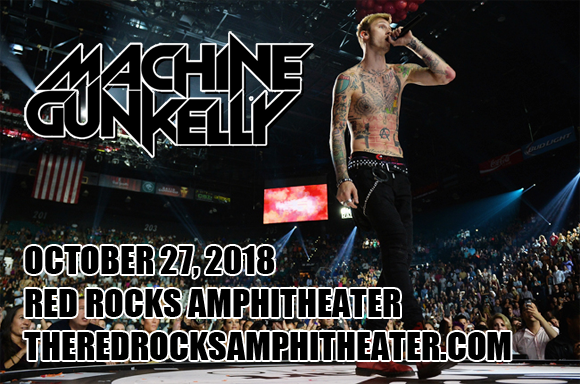 American rapper, singer and actor Machine Gun Kelly released his first mixtape, Stamp of Approval, in 2006. His national debut came four years later with the release of the award-winning single “Alice in Wonderland”. In 2011, he was booked to play  SXSW in Austin, Texas, and at the show was approached by Sean Combs, who offered him a record deal with Bad Boy Recordings and Interscope. Kelly's debut studio album, Lace Up, was released in 2012, launching the singles "Wild Boy", "Invincible", "Stereo", and "Hold On (Shut Up)", and debuting at number four on the US Billboard 200 chart. His 2015 follow-up, General Admission, also reached number four on the Billboard 200. His third and most recent studio album, Bloom, was released in 2017 and was certified platinum by the RIAA.