What an unmissable line-up for any Alternative Rock fans as two of the biggest bands have announced their co-tour for 2017!

Incubus & Jimmy Eat World will be coming to Red Rocks Amphitheater on Tuesday 3rd October 2017, along with special guests! And if that wasn't already enough awesome news – Incubus have also announced the release of a brand new album – the news many have been waiting for, for a very long time! Tickets are NOW on sale – grab yours before it's too late! 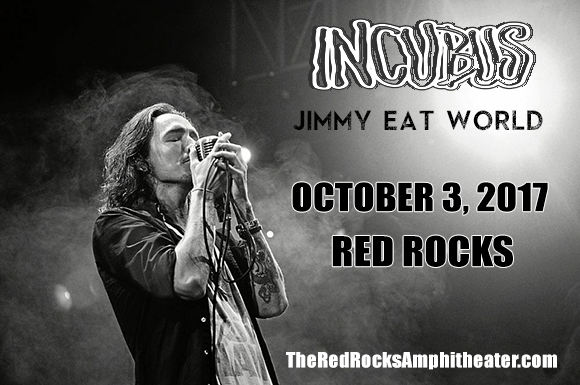 As they have gained their following throughout the years, one of the most famous Rock bands to hail from California – is the only and only Incubus. These guys hold the essence of the 1990's scene when they first formed and released single after single, hitting multi-platinum status…

Some of their most dedicated fans might agree that their first album 'Make Yourself' was one of their greatest, with the songs "Pardon Me" and "Stellar" – both put them on the map and gave them their niche heavy rock sound. Their next release would shape them into a more mainstream act, as they started to combine other genre's on; "Wish You Were Here", "Drive", "Nice to Know You" and "Warning" – all of which are unforgettable and still stay in the hearts of many, not just in the United States but globally!