Eclectic EDM DJ and producer Jai Wolf comes to Red Rocks Amphitheater on Monday 25th May 2020 in support of his red hot debut album The Cure to Loneliness! Not only will he be dropping tunes from the much-hyped genre-bending album, but he'll also be delivering a stack of his signature remixes to get the dancefloor rocking! Plus, he's curated a mind-blowing line-up of EDM acts to support him for this pumpin' show, including Kasbo, Manila Killa, Claud, Crooked Colours, Big Wild, and Hotel Garuda, keeping you dancing 'til you drop! 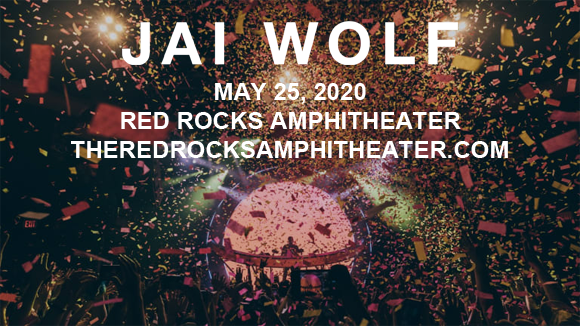 New York City-based electronic music producer Jai Wolf, aka Sajeeb Saha, began his career in 2011 under the stage name No Pets Allowed, making waves in the internet music community with a series of popular mashups and bootleg remixes. Saha began the Jai Wolf project in 2014, once again garnering attention with his remixes, landing a string of opportunities to collaborate with artists including Melanie Martinez, Dirty South, Alesso and Odesza. His debut single, "Indian Summer", was released in 2015 through ODESZA's Foreign Family Collective label. The Cure to Loneliness, his debut studio album, was released in 2019 alongside the singles "Lose My Mind" featuring Mr Gabriel and "Telepathy".