It's time for a truly special event. On Friday 26th May, Jethro Tull will be playing to Red Rocks Amphitheater, playing with the prestigious Colorado Symphony! This will be an unbelievable musical experience – book your tickets QUICK! 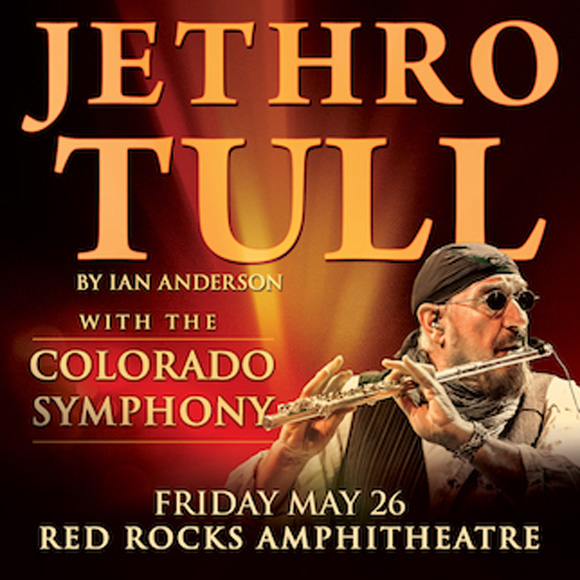 Jethro Tull and Ian Anderson really need no introduction. From their roots in blues rock, the band fast developed to include elements of folk music and hard rock to forge a distinctive footprint in the genre of progressive rock, most well known for the fluttering flutework of vocalist Ian Anderson, who is widely credited with popularising the instrument in the progressive rock genre. Having sold over 60 million albums worldwide, with 11 gold and 5 platinum in amongst them, they have been referred to by Rolling Stone magazine as “one of the most commercially successful and eccentric progressive rock bands.” Officially, the band came to an end in 2014 as Anderson focused on his solo career, but he will certainly be bringing the soul of the band back in what promises to be a spectacular live performance.

The show coincides with Ian Anderson's pending late March release “The String Quartets,” featuring Anderson working with the Carducci Quartet and arranger/conductor John O'Hara to create re-imaginings of well-beloved tracks. The release suggests that the album will be largely instrumental, with Anderson providing some vocals and a lot of flute, as well as full rearrangements and versions of the pre-existing work, promising a fresh new experience that remains true to the original songs. With the Colorado Symphony at hand at our Red Rocks show, fans are undoubtedly going to be treated to some of these lush new versions of tracks they love live!