Let the legendary Jimmy Buffett take you to totally tropical places with his sunshine-infused country music and stories from his wild and wacky life! Joined by his phenomenally talented Coral Reefer Band, Jimmy is an entertainer like no other – there's a reason his shows sell out year after year! See all you Parrotheads at Red Rocks Amphitheater on Thursday 13th October 2016! 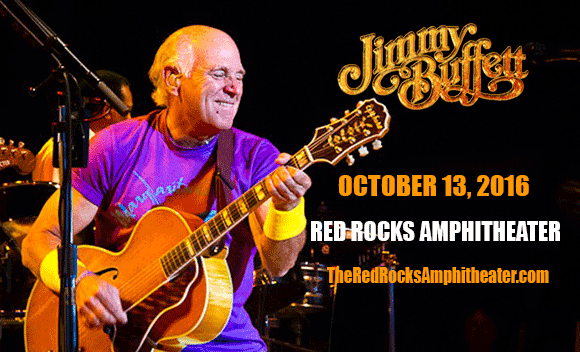 Jimmy Buffett is a singer, songwriter, musician, author, actor, and businessman, who started his music career in the late 1960s when he moved to Nashville to be a country singer. His debut album was released in 1970, but it was a few years later in Key West, after leaving Nashville when he split from his first wife, that Jimmy formed the laid-back beach-bum persona that he has become known for. Known for his anecdotal songs about an easy-going, sea-faring life, Buffett's music has been described as "drunken Caribbean rock 'n' roll," or Gulf-and-Western. Over time, Buffett's fan base (known as “Parrot Heads”) has grown to be large and incredibly loyal, based on his 28 studio albums and rapport with a live audience.