Red Rocks Amphitheater presents a legendary artist to perform this coming Summertime… It's the one, the only, Joe Bonamassa on Sunday 5th August 2018! Pulling out all the stops, Joe Bonamassa brings a classic show that cannot be missed, with his sensational, attention grabbing, powerful blues guitar, he's going to blow you away! Tickets are on sale now, get yours today to ensure your seat overlooking the Red Rocks view! 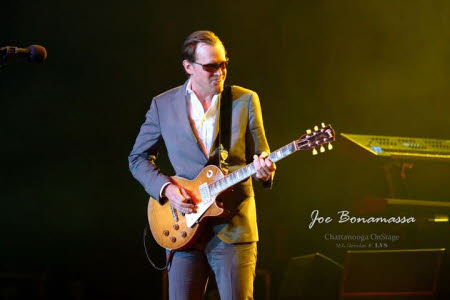 It's the guitar event of the year… Joseph Leonard Bonamassa aka Joe Bonamassa will be taking to the road in 2018… The American blues rock guitarist, singer and songwriter is known all around the globe for his influence and affect on the music history. His career has been a long standing one, inspired by fellow legends such as BB. King, who he supported when he was just 12 years old – a triumph for any aspiring young musician! And over the last 13 years, his impact has been greater than ever with 11 number 1 hit albums on the charts! It's time to put your hands together for him!

Born in New York, Joe Bonamassa was an early starter and realised quickly he had musical talent, kicking off at the early age of four he begun to learn the Guitar, which his family whole heartedly supported. His father would listen to British blues rock artists such as Jeff Beck and Eric Clapton which was quickly passed down to his son and would later be considered to be up there with them both.

With his wide collection of releases, Bonamassa has had three studio albums during 2002 and 2006 which straight away made the number 1 spot and his debut album includes some of his best ever material and has been covered numerous times throughout the years by the likes of Jethro Tull, Warren Haynes and Rory Gallagher.

Such a colorful, full power career has taken him to places he never ever dreamed of and still to this day, he is such a popular artist to catch live in concert so if you get the opportunity this coming Summer – do just that!!