The premier Grateful Dead tribute band that's rocked concert venues and music festivals over the past decade, Joe Russo's Almost Dead, is coming back to the Red Rocks for back-to-back rockin' shows. Catch them live on stage on Saturday, 3rd of June 2023 for a rockin' night of reimagined Grateful Dead hits including your crowd-favorites "Throwing Stones", "Touch of Grey", "Foolish Heart", and "Uncle John's Band" from their extensive catalog. Don;t miss out on Grateful Dead's best anthems brought to life on stage once again by Joe Russo's Almost Dead. Book your tickets now! 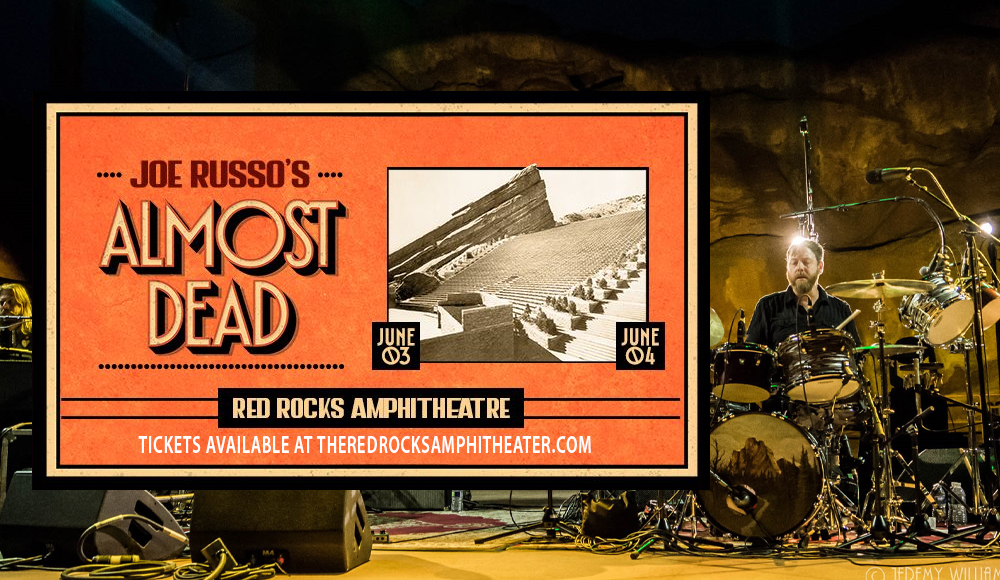 Emerging into the scene in 2013, JRAD was a product of a last-minute cancellation by another group, and thus Joe Russo hit up his crew and formed Joe Russo's Almost Dead to perform for the second night of the Freaks Ball XIII in NYC. Since then, the brand grew to become the country's favorite Grateful Dead tribute act for its unique arrangement and infusion of progressive rock elements to the original's masterpieces.

Together, Joe Russo, Dave Dreiwitz, Marco Benevento, Scott Metzger, and Tom Hamilton keep the legendary band's music alive for generations to come as they serve the ultimate Grateful Dead live concert experience in these modern times. They're known for incorporating a progressive rock/fusion twist to the Grateful Dead's legendary catalog, catching the attention of original fans and new listeners alike.

Kicking off every show in unison, they take the crowd by surprise with their soaring vocals and unique improvisations with energy-inducing guitar solos.

Taking back the crowd to the late 60s to 80s with an extensive Gratfeful Dead catalog up their sleeves, they've been raved for their astounding talent and unique interpretations of classic rock music. Get ready for a trip down memory lane as they perform Grateful Dead's best hits and fan-favorites which may include "Truckin'", "Ripple", "Touch of Grey", "Good Lovin'", and many more.

"JRAD takes improvisational jam rock to the nth degree." as acclaimed by Rolling Stone for their Peach Festival performance in 2018. They're definitely a tribute act who deserves all the recognition and praise. More than just a carbon copy performance of the Grateful Dead, they're distinct artists at their very core, incorporating their own identity while serving the best Grateful Dead experience you could ever ask for.