It's the opening night for this years SeriesFest – an international celebration dedicated to showcasing the best new pilots from established and emerging content creators! Performing on this very special evening is R&B superstar, John Legend & comedian Whitney Cummings, both will be coming to Red Rocks Amphitheater on Thursday 18th June 2015! John legend is set to play an intimate acoustic show, sitting at his favorite spot: next to the piano. Come and enjoy as his gorgeous songs light up the stadium… 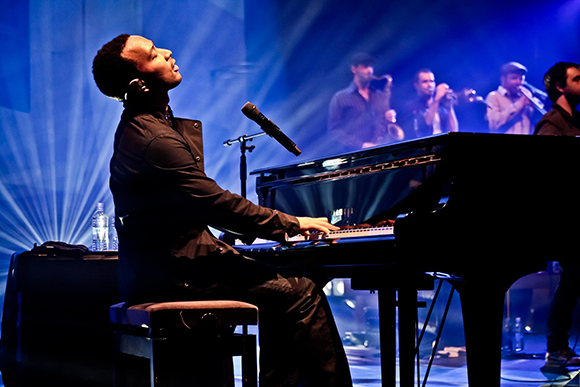 John Legend is an R&B vocalist, pianist and producer, his soulful music hints of elements of hiphop and neo-soul. It's hard to imagine the urban soul scene without John Legend in it, from the very beginning he has collaborated with artists such as; Jay Z, Kayne West, Common, Alicia Keys and Lauryn Hill. Before making it in his incredible career as a solo musician in his own right.

Legend released his debut album, Get Lifted, on GOOD Music back in December 2004. It featured production by Kanye West, Dave Tozer, and will.i.am, and smashed the charts at number 7 on the US Billboard 200, selling 116,000 copies in its first week! Later the record certified gold and was an international success – resulting into worldwide sales of 850,000 copies.
A year later, John released his second album, 'Get Lifted' which included his biggest and most iconic track 'Ordinary People', the song is known for its raw emotion, stunning lyrics and simplicity of just him and his piano.