Get ready for a breathtaking event that showcases one of the world's greatest songwriting talents as you've never seen him before, as legendary troubadour John Prine comes to Red Rocks Amphitheater on Sunday 28th July 2019 with the Colorado Symphony Orchestra! Exploring the rich back catalog of a man who has influenced the likes of Bob Dylan and Roger Walters, this show sees Prine in the stunning setting he deserves, with the backing of some of the state's most talented classical musicians! A one-of-a-kind treat for true music fans! 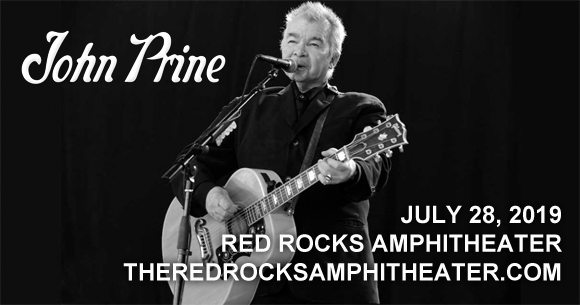 Regarded by many as one of the greatest songwriters of our time, and an inspiration to a variety of notable artists, including Bob Dylan, Johnny Cash and Roger Waters, John Prine is an American singer songwriter who began his career in the 1970s. A stalwart of the Chicago folk scene, he was discovered by country folk singer Kris Kristofferson, who helped him land a record deal with Atlantic Records. He released his eponymous debut album on the label in 1971, becoming an instant critical hit with the hits "Illegal Smile," "Sam Stone," "Angel from Montgomery" and "Paradise," which soon became some of his signature songs. Prine's success has continued throughout the decades: in 1984 he launched Oh Boy Records – his own record label, in 1992 he won he first Grammy Award for the album Missing Years (1991), and in 2005 he won another for Fair & Square (2005). In 2015, he was honoured by the Grammys again, this time with the Grammy Awards Hall of Fame Award. Tree of Forgiveness, his most recent album, was released in April 2018 and debuted at number five on the Billboard 200 – his highest ever ranking on the chart.