Hail to the moguls of mixtapes! Rap and hip-hop superstars Kevin Gates & Gucci Mane will rock and rule over at the Red Rocks Amphitheater on Saturday 16th April 2022. Kevin Gates who lorded over the charts with hit albums and mixtapes such as "Chained to the City", "Islah", "Stranger Than Fiction", and "Luca Brasi 2" will share the stage with the iconic Atlanta MC Gucci Mane. These two hip-hop lords will slay it with razor-sharp verses and ground-pounding beats — absolutely dope! as their fans would often say. At the drop of a hat, legions of fans will surely flock in to score tickets to the show. Tickets are now on sale, book them now! 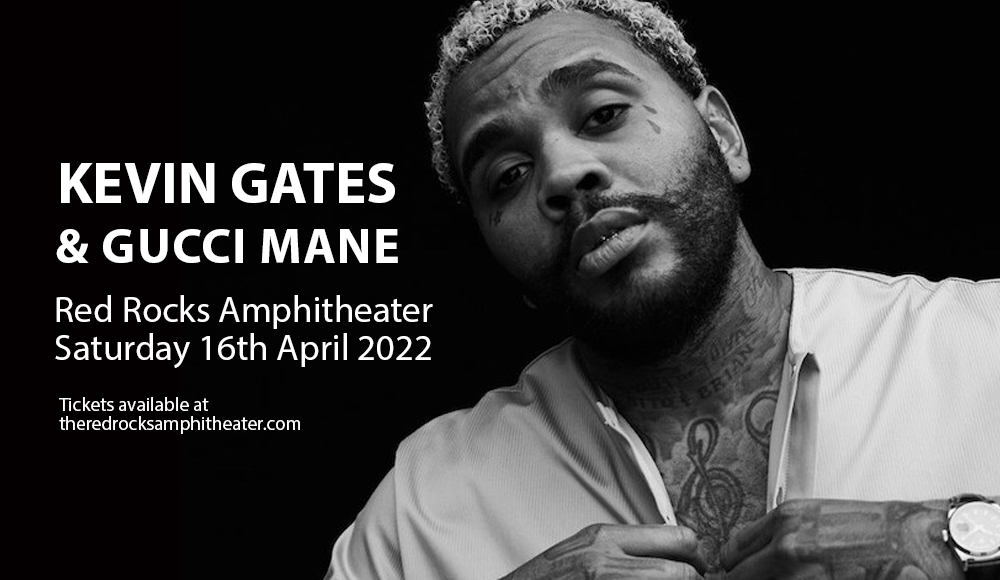 Kevin Gates & Gucci Mane may have initially gone astray and muddled themselves in misdeeds and misdemeanors, and yet both have made their way up and redeemed themselves through music. Indeed, their unbridled passion to express themselves and tell their story through mixtapes led them to higher ground, where fans now look up to them and see not only their genius but also their honesty and emotions.

Kevin Gates was off to a good start as a rapper from Baton Rouge, Louisiana, releasing a string of mixtapes including 2007’s “Pick Of Da Litter”, 2008’s “All Or Nuthin”, 2009’s “All In”, and 2010’s “Behind Enemy Lines” and “The Leak”. Then after the release of his single “Get in the Way”, he was incarcerated for 31 months. As soon as he got out, he immersed himself again in making music, releasing and getting an excellent buzz with the mixtape Make 'Em Believe 2012. The following year, his breakout mixtape "Luca Brasi 2" received critical praise with Pitchfork saying it, "imbues trap's claustrophobic bleakness with an emotional nakedness, capable lyricism, and melodic certitude many of its recent breakout stars have lacked." Rolling Stone named the mixtape's single, "Wylin' ", the 40th best song of 2013. There was no looking back for Kevin Gates; he moved and forged on and his debut studio album, "Islah", was released in January 2016 and peaked at number two on the US Billboard 200 chart. "It feels good when people appreciate my art in its entirety:, says Gates. "That makes me feel great. I want everyone to experience this in its entirety. Other than that, I don't have any complaints. As long as I can record, I'm okay. That's all that matters."

Like Kevin Gates, Gucci Mane had a brush with the law which resulted in a 90-day jail time. After that, he took his music seriously which resulted in critically and commercially successful mixtape releases. One of his most successful ventures was a 2016 collaboration with Rae Sremmurd for the hit track "Black Beatles", giving Gucci Mane his first number-one single on the US Billboard Hot 100 chart. His is a prolific wordsmith and artist who has spawned 14 studio albums and over 71 mixtapes. Fans, media, and his peers have lauded his work, calling him an "avatar of East Atlanta," and "the most influential underground rapper of the past decade."

The hip-hop battleground is ready to rock and rumble with these rap titans. Get your tickets and be there when the beat drops!