Nobody else can rock you like Queen, but Killer Queen! Catch their commanding performance as they slay Queen's biggest rock anthems on the live concert stage, at the Red Rocks Amphitheater on Tuesday 19th July 2022. Killer Queen was awarded and cited as “Worldwide Best Tribute Band” for their expertly crafted musicianship and astoundingly accurate portrayal of Queen. Their impeccable vocal harmonies, close-to-the-original looks, costumes, and lead singer Patrick Myers' boundless energy and magnetic showmanship are so convincing that it seems Freddie Mercury was brought back to life. Don't let anyone stop you now. Tickets are available to book, so just click on that 'get tickets' link right here, right now! 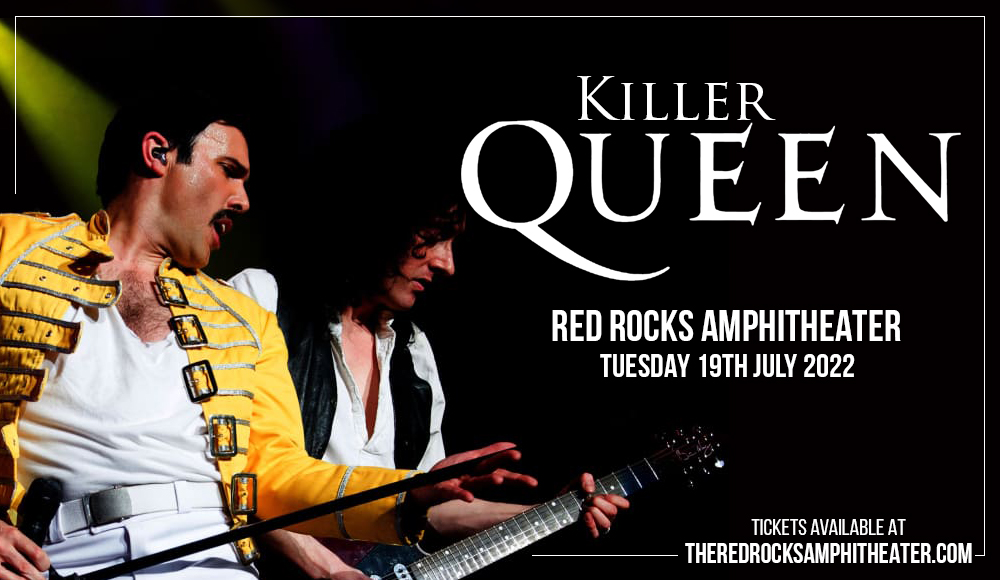 It is a fact that amongst rock royalties, Queen reigns supreme with 18 number one albums, 18 number one singles, and is one of the world’s best-selling music artists. Their earth-shaking live performance at Live Aid in 1985 is regarded as one of the greatest moments in rock history. However, the demise of Queen's phenomenal frontman, Freddie Mercury on November 24, 1991, has left a void on the world concert stage. Fans have been yearning and wondering as to how to get that kind of Queen magic on stage ever again?

Queen lives in Killer Queen. Their musicality and their eerily uncanny resemblance and accuracy have brought the Queen kind of magic back to life. Formed back in 1993, Killer Queen's early gigs were at the London University, following in the footsteps of the original Queen who had played their first shows there 23 years earlier. Their reputation grew in leaps in bounds as they were awarded “Worldwide Best Tribute Band.” Killer Queen has worked and recorded no less than Roger Taylor and Brian May, themselves. Personally hand-picked by Sir Bob Geldof, Killer Queen stood in for Queen in a restaged tribute Live Aid concert.

We Will Rock You, We Are The Champions, Love of My Life, Don’t Stop Me Now, Under Pressure, Another One Bites The Dust, Somebody To Love, Crazy Little Thing Called Love, Fat Bottomed Girl, Killer Queen, Radio Ga Ga, You’re My Best Friend, Bohemian Rhapsody… This is the night when you get to sing-along, stomp, clap, and simply go wild hearing these anthemic gems again. Don't miss it; book your tickets now!