Australian psychedelic rockers King Gizzard and The Lizard Wizard return to Red Rocks Amphitheater on Tuesday 11th October 2022 (Rescheduled from Tuesday 12th October 2021) for a marathon set that will feature music from the extensive 15-album back catalog that these incredibly hard-working artists have produced in the time they've been together. As always, not only will the cult favorites be providing a night of stellar music, but they'll also be providing a mind-blowing feast for the eyes! This will be one hell of a special show! 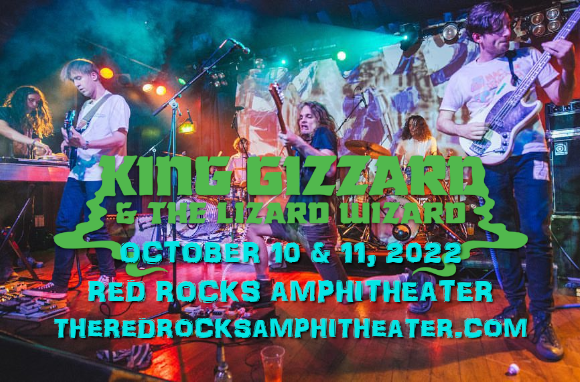 Prolific and indefinable, Australian psychedelic rock band King Gizzard and the Lizard Wizard draw from a range of musical influences, including surf music, garage rock and psychedelic rock with film music, progressive rock, folk, jazz, soul and heavy metal, to create a sound that is both captivating and unique. The group was formed in Melbourne, Australia in 2010, and over the years they have cultivated a cult following due to their incredible live sets that create dreamy soundscapes and stunning visuals. Dedicated to creating new material, the band has produced fifteen full-length studio albums since their debut, 12 Bar Bruise, with five albums released in 2017 alone. King Gizzard and the Lizard Wizard released two albums in 2019: Fishing for Fishies and Infest the Rats' Nest.