Be inspired by a passionate and impactful two-night concert event at the Red Rocks Amphitheater this summer. Join TobyMac, Tauren Wells, Matthew West, and many more this August 4 and 5, Thursday and Friday, as they sing for praise and worship in Colorado’s famous venue. Presented by the Awakening Foundation, a non-profit supporter of K-LOVE, the two-night event features different sets of Christian artists on two separate nights. Joining TobyMac on the first night are Danny Gokey, Jordan Feliz, Dante Bowe, Cochren & Co., and Katy Nichole. Mac Powell, Cory Asbury, Riley Clemmons, and Andrew Ripp will join Tauren Wells and Matthew West on the second night. Catch all of their performances by getting your 2-Day Pass here. Click on the “Get Tickets” button to secure your tickets now! 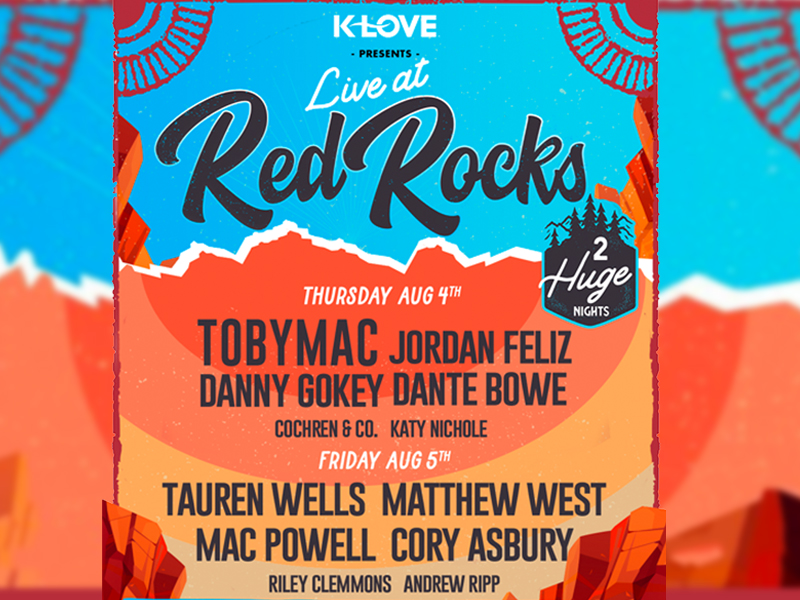 As a contemporary Christian music radio programming service, K-Love has always been faithful to its mission of creating compelling media that inspires and encourages people to have a meaningful relationship with Christ. Thus, this year's K-Love concert is an answer to that call of bringing Christ to people through the power of music. With the Awakening Foundation, K-Love organizes a two-night concert event for all Christian music lovers.

A concert evening under the stars at the Red Rocks Amphitheater will await Christian concert-goers this August 4 and 5, as well-known singers will grace the event on two separate nights. The first night's lineup will be spearheaded by the Grammy-award winner TobyMac. A former member of DC Talk, TobyMac is a household name in the music industry. He is a multi-Grammy award-winning singer who has enthralled the world nay his singing and rapping skills. He is famous for his hits "Speak Life," "I Just Need U," "Til The Day I Die," and "Me Without You," among several others. He will be joined by other important and promising names in the industry, including Danny Gokey, Jordan Feliz, Dante Bowe, Cochren & Co. and Katy Nichole.

The second evening features an equally powerful lineup of Tauren Wells, Matthew West, Mac Powell, Cory Asbury, Riley Clemmons, and Andrew Ripp. Although he is relatively new to the Christian music industry, having just released his terrific debut album — "Hills and Valleys" — in 2017, Tauren Wells is one of the biggest names to grace the event's second night. He rose to popularity due to his impressive collection of hits, such as "Known," "God's Not Done with You," and "Famous For (I Believe)." West, on the other hand, is an American contemporary Christian musician who is most famous for his songs "More, "You Are Everything," and "The Motions."

Join all these Christian artists in a two-night concert event filled with inspiring and uplifting performances at the Red Rocks Amphitheatre. Don't miss this chance to see these big stars all on one stage! Grab your 2-day Pass here by clicking the "Get Tickets" button.