One big inspirational concert comes your way this August 5 at Colorado's Red Rocks Amphitheatre as the multi-Grammy award-winning singer and rapper TobyMac spearheads this year's "K-Love Live at Red Rocks." Be inspired to get closer to God through praise and worship songs from TobyMac and other significant gospel and contemporary Christian artists, including Danny Gokey, Jordan Feliz, Dante Bowe, Cochren & Co., and Katy Nichole. With such a promising lineup, the concert is expected to be packed with inspirational and uplifting performances that will truly make one feel the presence and love of Christ. So if you want to be a part of this fantastic concert, don't forget to grab your tickets here. Click on the "Get Tickets" button for a secure and fast transaction. 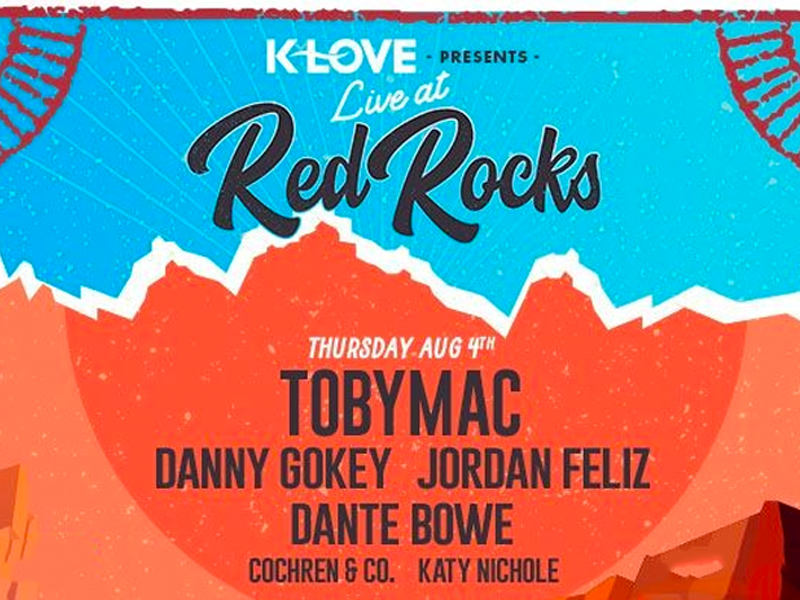 With its mission to create compelling media that inspires and encourages people to have a meaningful relationship with Christ, K-Love, together with the Awakening Foundation, organizes a two-night concert event for all Christian music lovers. A concert evening under the stars at the Red Rocks Amphitheater will await spectators this August 4 and 5.

Well-known Christian singers will grace the event on two separate nights. The first night’s lineup will be spearheaded by the Grammy-award winner TobyMac. A former member of DC Talk, TobyMac is a household name in the music industry. He went for a solo career after the famous band went on hiatus in 2000. He released his first album, Momentum, in 2001 and went on to release seven (7) more until 2018. He won his first Grammy in 2009 for Best Rock Gospel Album for “Alive and Transported.” He was nominated for Best Contemporary Christian Music Album five times and won the coveted award twice in 2013 and 2016. In addition, he has over 20 GMA Dove Awards win, one from American Music Awards and two from Billboard Music Awards. Indeed, he is one of the most significant contemporary Christian music artists of this generation. Thus, his participation in this event is one to look out for.

TobyMac will be joined by other Christian singers, Danny Gokey, Jordan Feliz, Dante Bowe, Cochren & Co., and Katy Nichole. Catch all of them on the first night of K-Love Live at Red Rocks this August 4 Thursday. Grab your tickets here by clicking the “Get Tickets” button. See you there!