Kraftwerk is celebrating its 50th anniversary this year and the pioneering German band comes to Red Rocks Amphitheater on Monday 29th June 2020 as part of a global 3D tour! As any fans of the game-changing electronic innovators know, their live shows are always larger than life immersive spectacles that transport the audience to a visually stunning robot world! Expect to have your minds blown by this truly distinctive and iconic group as they draw from five decades of music to create an unforgettable once-in-a-lifetime event! 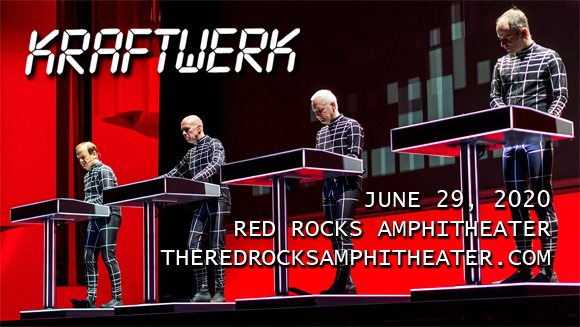 One of the first bands to truly embrace fully electronic instrumentation, Geramn band Kraftwerk was formed in Düsseldorf in 1970 by Ralf Hütter and Florian Schneider. The band began as a krautrock act, but over the years transitioned to using synthesizers, drum machines, and vocoders to create a new style of music that they catagorized as "robot pop." In 1974, Kraftwerk released its fourth studio album, Autobahn, and radio edit of its title track became an unexpected hit internationally, reaching number 11 in the UK, number 12 in the Netherlands, number 25 on the US Billboard Hot 100 chart, and number 30 in Australia. The band followed with the acclaimed album Trans-Europe Express (1977), which is often considered their archetypal work and has appeared on top album lists from a variety of publications. 1978's The Man-Machine was also a success, and a 1982 re-release of the album reached number nine on the UK Albums Chart. Kraftwerk won the Grammy Hall of Fame Award in 2014 and in 2015, Autobahn won the Grammy Hall of Fame Award. The band's latest release, 3-D The Catalogue (2017), won the 2018 Grammy Award for Best Dance/Electronic Album.